I’m not a big fan of movies with happy endings. They’re forgettable. The grim movies tend to stick with me for much longer; swirling around in my head like the lingering scent of a rancid fart. It makes me all the more appreciative of fresh air. I can’t quite recall when my love for the darker side of films was truly realized. Perhaps it started to sprout after watching Mark Lester’s disturbing Class of 1984 in an empty Bronx movie theater in 1981 or it might have been whilst watching Alan Parker’s visually stunning Pink Floyd The Wall in 1982. But I really believe it began when I went to see Ridley Scott’s brilliant sci-fi film noir Blade Runner in 1983. Over the years, my appreciation for films that take a walk on the dark side of life has only grown stronger.

Here are a few more great movies that you’ve probably never seen…but should: 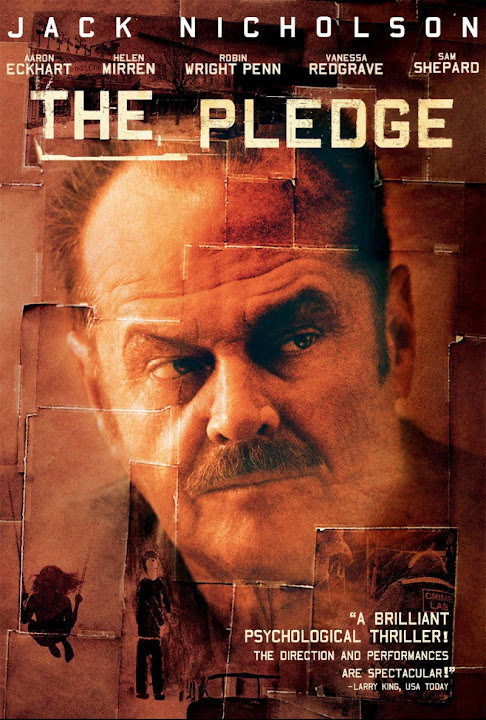 The Pledge [2001]
Directed by Sean Penn, The Pledge stars a stripped-down Jack Nicholson in one of the strongest performances of his career. Veteran police detective Jerry Black (played by Nicholson) makes a pledge to the parents of a brutally murdered seven-year-old girl that he will bring their daughter’s killer to justice. Now retired, the investigation begins to consume his life and leads him to uncover evidence that puts him on the trail of a mysterious serial killer who may be responsible for the killings of several young girls. Featuring a stellar cast [Benicio Del Toro, Aaron Eckhart, Helen Mirren] and a heartbreaking cameo by Mickey Rourke, The Pledge will haunt you long after you’ve hit the eject button.
TRAILER 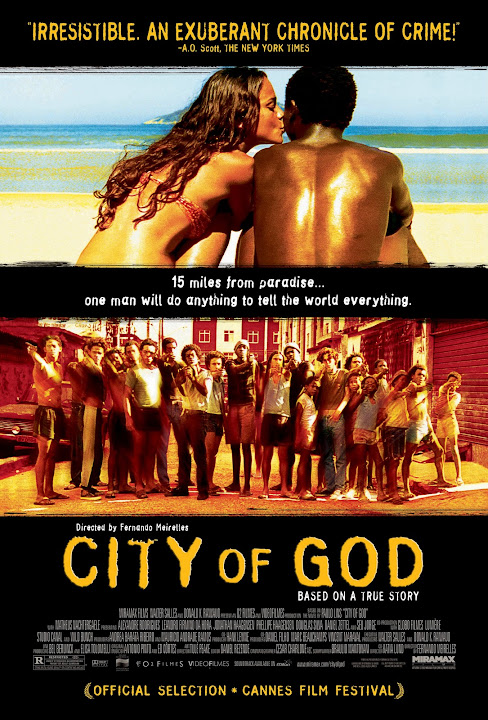 City of God (Cidade de Deus) [2002]
The feature debut by Brazilian director Fernando Mereilles is an uncompromising, yet wildly entertaining, story about the rise and fall of brutal sociopath gang leader Li’l Zé (played with villainous glee by Leanadro Frimino da Hora). The film is narrated by Rocket (Alexandre Rodrigues), a young man who wishes to become a photographer, despite the vicious spiral of violence around him. Rife with fast-paced editing and handheld cameras that give the film its gritty, realistic look (the film was nominated for an Academy Award for Best Cinematography), City of God is a visually electrifying and terrifying film that still manages to find time for the occasional moments of dark humor.
TRAILER 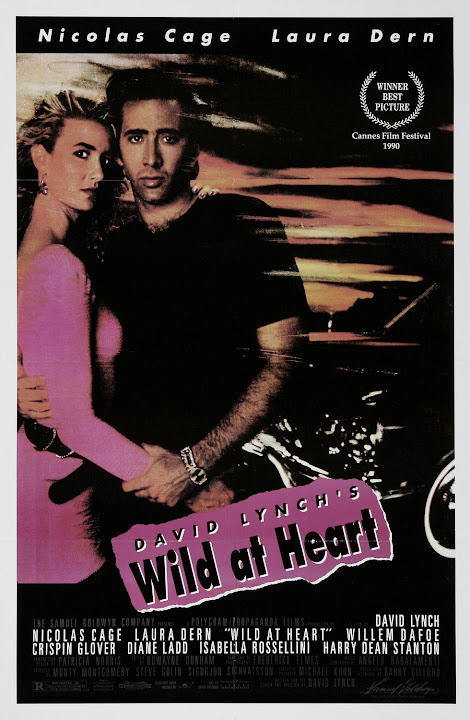 Wild At Heart [1990]
You should never watch a David Lynch film by yourself because you’re gonna need somebody to discuss the film with after it’s over (OK, so what was up with that jitterbug contest?) but “Wild At Heart” just might be Lynch’s most straight-forward narrative of any of his films. Nicolas Cage and Laura Dern play Sailor and Lula, a pair of twisted lovers who embark on a cross-country trip pursued by the types of bizarre characters that Lynch’s film are infamous for. Most notable are Lula’s insanely obsessive mother Marietta (played by Dern’s real-life mother Diane Ladd) and fiendish sociopath Bobby Peru (played by a grotesquely fake-toothed Willem Dafoe) who tricks Sailor into joining him on an ill-fated robbery. Loaded with sex, jolting violence, and disturbing imagery, yet also wickedly funny, “Wild At Heart” is a  kinky fairytale that illustrates that great love can endure all…even David Lynch.
TRAILER 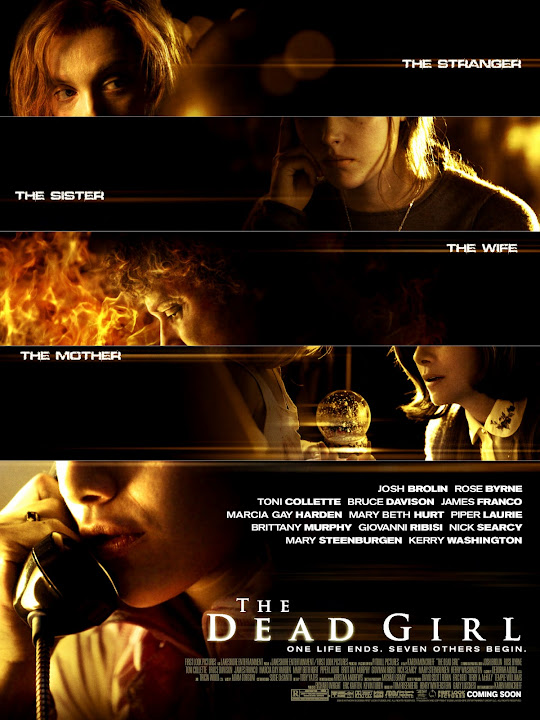 The Dead Girl [2006]
Writer/Director Karen Moncrieff’s sophomore effort (after her 2002 indie fave “Blue Car“) is a complex and haunting film that instantly demands a second viewing. The dead girl (played with furious energy by Brittany Murphy) is a junkie and a prostitute who refuses to lay down and die no matter how many times life decides to shit upon her. The discovery of the dead girl’s brutalized body sets the film in motion. The film then works its way backwards (through multiple plots) to the tragic events that led up to the murder and its sobering aftermath. Featuring a stellar cast (Toni Collette, James Franco, Giovanni Ribisi, Mary Beth Hurt, and Josh Brolin) and some of the finest performances you’ll see on any film, “The Dead Girl” is neither a thriller or a whodunit. It’s a brooding and unpredictable film about how the tragic death of one person can have a rippling effect on so many other people’s lives. Highly recommended.
TRAILER 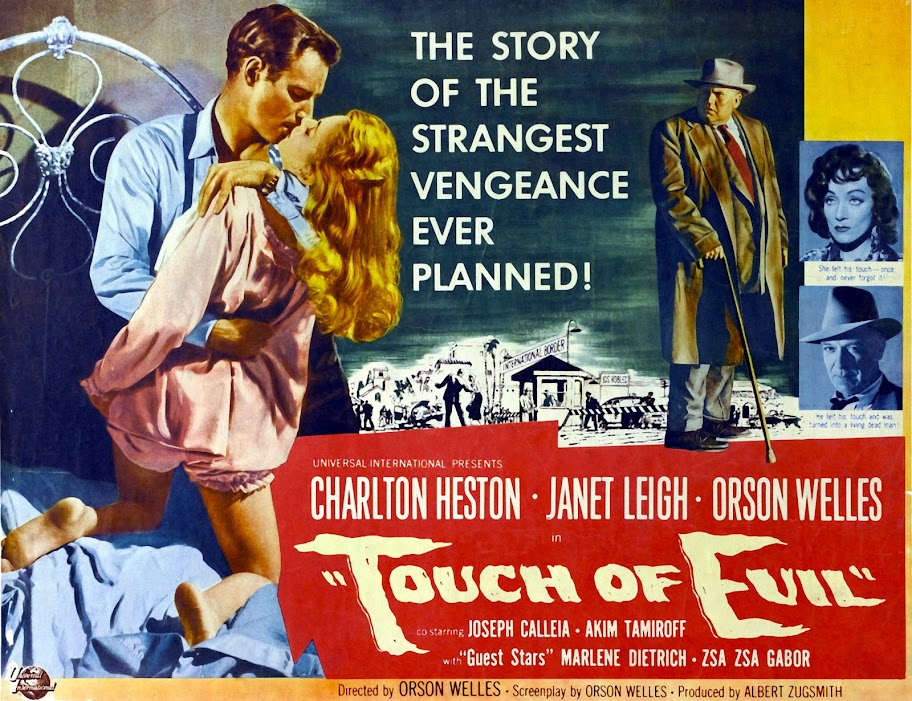 Touch of Evil [1958]
This classic crime thriller, directed by the great Orson Welles, opens with one of the most famous tracking shots in film history. The camera follows a car carrying a bomb (placed in the trunk by a shadowy assassin) as it drives through the seedy Mexican-American town of Los Robles, even lowering to street level several times, before the bomb explodes (3 minutes and 20 seconds later) offscreen(!). The explosion attracts the attention of a Mexican district attorney named Mike Vargas (played by Charlton Heston!) who’s honeymooning with his wife (played by Janet Leigh). We are also introduced to the town’s resident sheriff, Hank Quinlan, a massive, sweaty, rambling figure (played by Welles himself). During the ensuing investigation, the clean cut Vargas accuses the shady Quinlan of planting evidence which leads to Quinlan trying to frame Vargas (and his bride!) on drug and murder charges. But the real star of the film is Welles; his visual flamboyance (if the film came out today, people would still marvel at the camerawork) and his brilliant portrayal of the haunted Sheriff Quinlan. After more than 40 years, “Touch of Evil” can still send shivers down your spine.
TRAILER 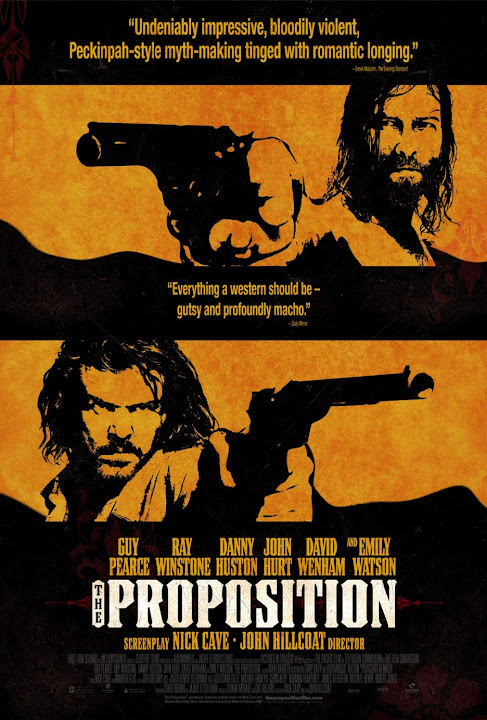 The Proposition [2005]
The Australian Outback is the setting for director John Hillcoat’s sun-baked Western. Set in the 1880’s, the story centers around a lawman named Capt. Stanley (played by the always-good Ray Winstone) and his obsession with the capture of Arthur Burns and his brothers Charlie and Mike who are on the run for rape and murder. After capturing Charlie (played by a grizzled Guy Pearce) and his simpleton brother Mike (Richard Wilson), Capt. Stanley presents Charlie with a proposition: ride free and bring back the eldest and most notorious of the brothers (played with remarkable serenity and savagery by Danny Huston). If he’s not back in nine days with Arthur, dead or alive, he’ll hang the terrified Mike. Charlie reluctantly accepts and in time, finds his brother, but isn’t certain if he can carry out his mission. His dilemma, to kill his brother to save his brother, spurs him towards an unforgettably violent outcome. Written by Nick Cave (who also composed the soundtrack to the film), “The Proposition” is awash in stark beauty (thanks to Benoît Delhomme’s cinematography) and unforgiving brutality. A classic.
TRAILER 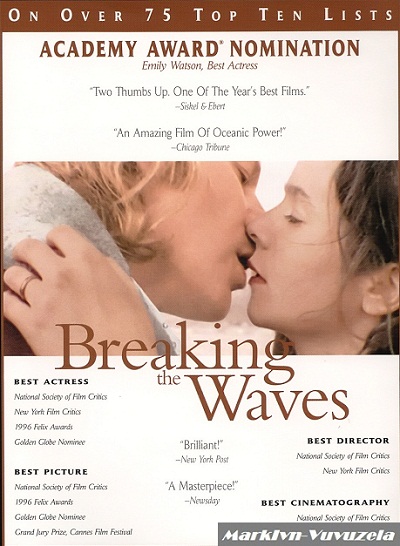 Breaking the Waves [1996]
Few filmmakers are as bold or defiant as director Lars von Trier. There is no middle ground in his films. Instead, he forces you to choose your side. In what would probably be just a simple love story in the hands of less capable directors, von Trier has created a deeply disturbing and multi-layered drama. And yet, it’s also a story of love and devotion, sacrifice and miracles. The film takes place in a remote Scottish village with deeply-rooted fundamentalist Christian beliefs. So when meek, kind-hearted Bess (played by Emily Watson who turns in a stunning performance) decides to marry Jan (a terrific Stellan Skarsgard), a non-believer who works on one of the big oil rigs in the North Sea, the close-knit community is not pleased. While working on the oil rig, tragedy strikes as a freak work accident renders Jan paralyzed from the neck down. In the hospital, Jan begs Bess to entertain him by having sex with other men and telling him about her experiences. Reluctantly, she agrees, believing her actions might cure him. As his condition worsens, her behavior grows more desperate leading to an unforgettable revelation. A tough film to watch at times, but greatly rewarding.
TRAILER 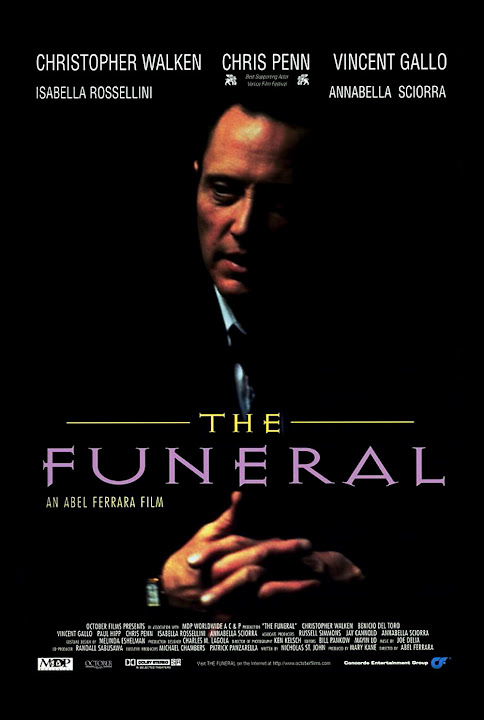 The Funeral [1996]
Abel Ferrara’s dark brooding tale of the undoing of a mobster family in 1930’s New York is his best film. Not nearly as bleak as “Bad Lieutenant” (how could any film be?) Ferrara still manages to unsettle his audience with his usual themes of honor, loyalty, and Catholic guilt. The film tells the story of two brothers, Ray (played by the intense but unusually subdued Christopher Walken) and Chez (a terrifying Chris Penn) who are burying their slain younger brother Johnny (Vincent Gallo). The story is told in two time periods, the day of the funeral and the recent past, when Johnny is alive. Ray and Chez thirst for revenge but as they come closer to uncovering their brother’s killer, they’re confronted by their own moral bankruptcy which leads to an explosive and unforgettable climax. The terrific cast also features Benicio del Toro, Isabella Rossellini, and Annabella Sciorra.
TRAILER 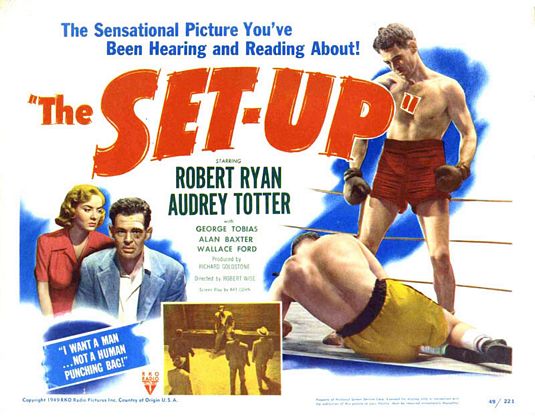 The Set-Up [1949]
Directed by the great Robert Wise, “The Set-up” is a rather simple story: An over-the-hill fighter named Stoker (earnestly played by Robert Ryan) becomes a pawn in a small-time mobster’s fix and has to take a dive to a younger, up-and-coming fighter. Problem is, Stoker still feels that his return to contention is just a punch away and Stoker’s manager fails to tell him the fix is on thinking he’s got no chance against the younger fighter anyway. But after enduring the younger fighter’s best, Stoker starts winning the fight and finds out about the fix after his stubborn pride has already been kicked into overdrive. “The Set-up” unfolds in real-time (watch for the opening and closing shots of a clock) and runs a mere 72 minutes but possesses a wonderful sense of urgency. The fight scenes rival those of “Rocky” and “Raging Bull” (minus the flowing blood) and director Wise magnificently fleshes out the feel of a small time boxing arena; you’re thrust right into the middle of the blood-thirsty crowd and the sweaty, smoky atmosphere. “The Set-up” is a potent left-hook of film noir, sports and sizzling melodrama. One of the all-time great films. 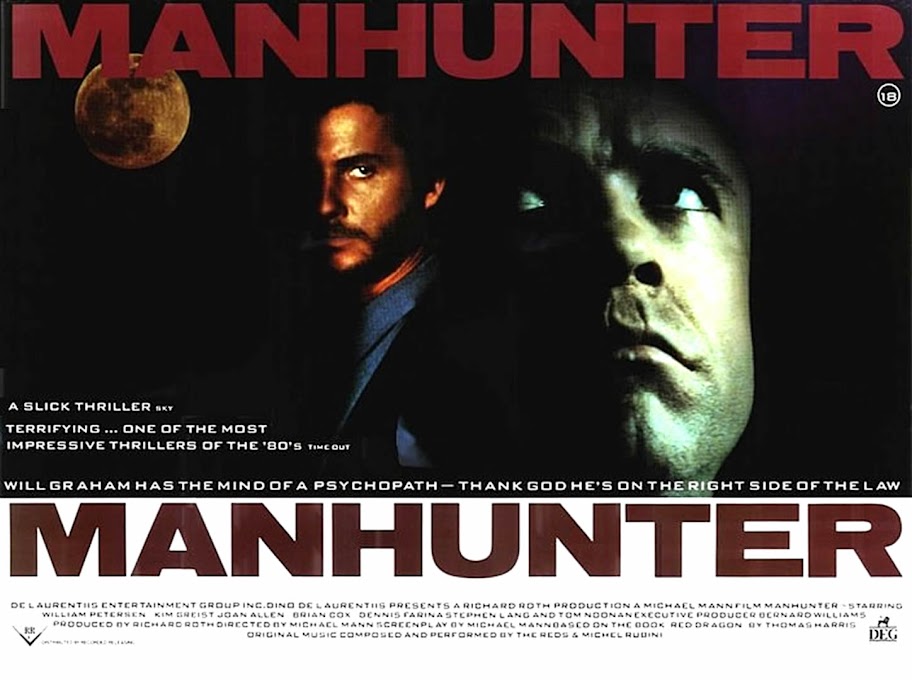 Manhunter [1986]
“The Silence of the Lambs” wasn’t the first on-screen appearance of the sinister Dr. Hannibal Lecter. He appeared five years earlier in Michael Mann’s gritty crime drama “Manhunter” (which is actually a prequel to “The Silence of the Lambs”). Adapted from Thomas Harris’ 1981 novel “Red Dragon”, “Manhunter” follows former FBI agent Will Graham (played by William Peterson of “CSI” fame), who has voluntarily retired after being nearly fatally injured capturing Dr. Lecter (played with far less flamboyance but with just the right creepiness by Brian Cox). Graham is soon lured out of retirement to track down another serial killer, “The Tooth Fairy” who has slayed two families during a full moon. Brilliantly paced by director Mann, the film is awash in stylish, color-rich cinematography courtesy of Dante Spinotti. “Manhunter” is a hypnotic and gripping thriller that still packs a wallop 25 years later.
TRAILER

Got some badass films that take a walk on the darker side of life? The kind of films that send Hollywood’s “feel good” movies running for their mommies? Then spit them out in the comments below…