“The Candle” | A Short Documentary Film by Dan Perez

“The Candle” is a short but sweet documentary film I shot in the Bronx in the summer of 2013. The film introduces you to Marthalicia Matarrita, a Dominican/Costa Rican artist raised in New York City with her two brothers, Tomas (older) and Jorge (younger). Encouraged by her mother, Marthalicia and her brothers realized a passion for art at a very young age; and during a very difficult time in their lives.

I came across Marthalicia during an internet search for Bronx street artists that summer. My younger brother Ruben and I were in the process of creating a video series on street artists and I was looking to feature someone from my old stomping grounds (I was born and raised in the Bronx). I found her art style, a fusion of nature and the harsh realities of inner city life, fresh and appealing so I reached out to her by phone and that’s when she told me that her two brothers were also artists. The proverbial plot had just thickened. 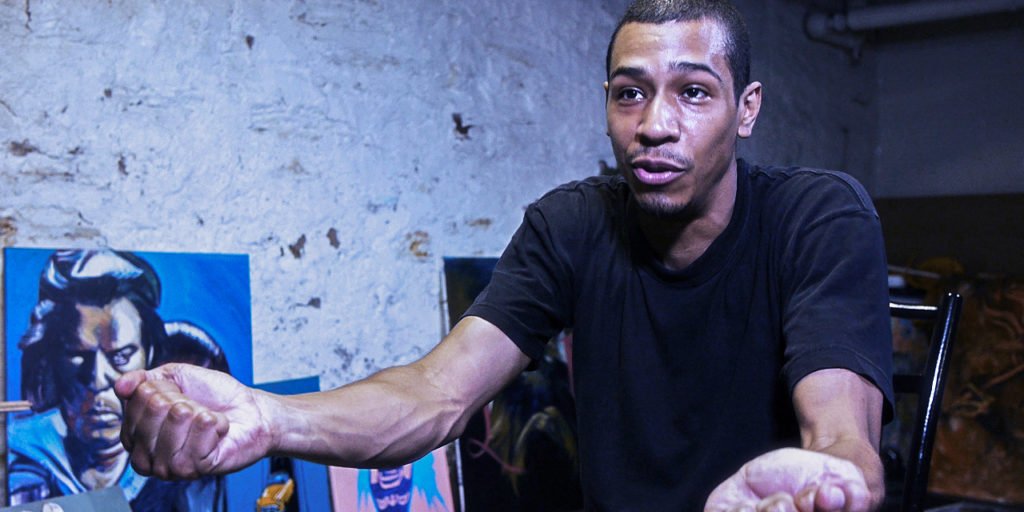 I met Marthalicia face-to-face for the first time a few days after our initial conversation as she was working on a mural project at the Tinton Avenue projects in the Bronx. I was able to arrange an interview with her and her brothers Tomas and Jorge for later that evening. When my brother and I arrived for the shoot, we entered a sweltering tenement basement used by Marthalicia and her brothers as an art studio. What followed was a series of interviews where the many hardships this family had to endure came to light. Financial hardships had stripped the family of resources most of us take for granted; the family of five found themselves in a small one-bedroom apartment and even a homeless shelter. Their passion for art, however, provided an escape – even when the electricity went out. 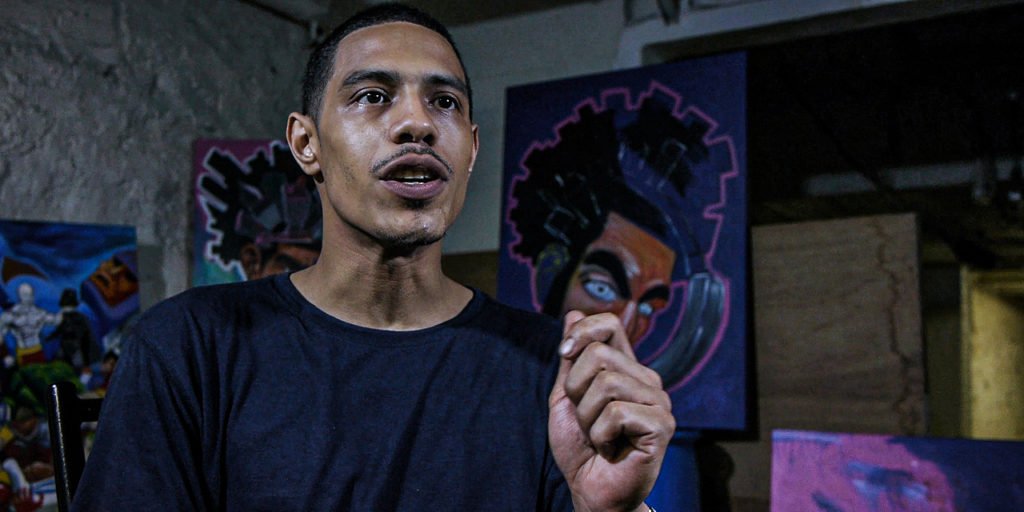 During the shoot, I also came to learn that it had been several years since Marthalicia and her brothers had actually come together to paint. Watching them work the canvas together with their own distinct styles over several hours of what turned out to be a long steamy night, I couldn’t help but feel I was part of a special moment for this family; I think they felt it as well. And as I edited this short film in my own studio back home in South Florida, I felt all the more fortunate to have spent the evening with a family that had overcome so much…

And I learned that art has a power to give joy in even the harshest of environments. It was a good lesson. 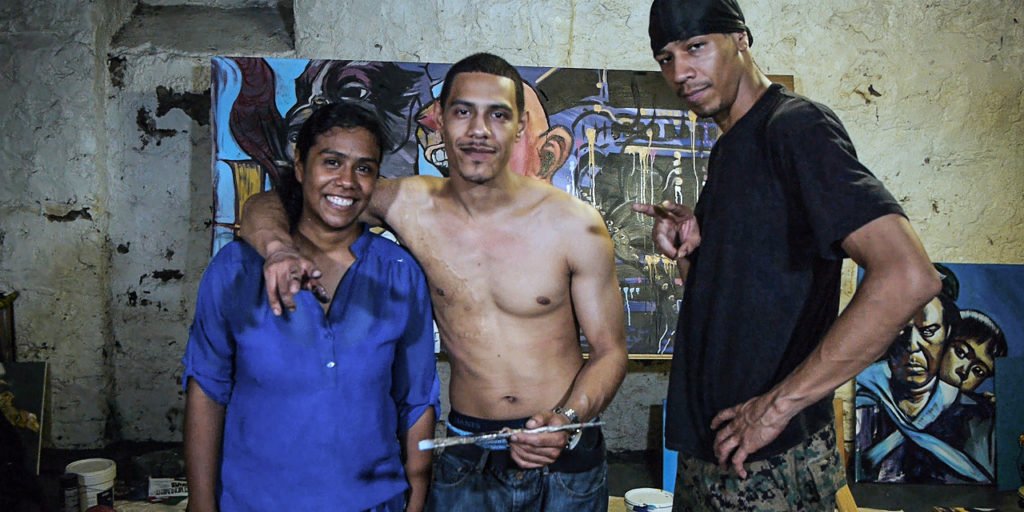 The film has been screened in a handful of small film festivals over the years since it made its premiere at the 2014 Indie Boots Film Festival in Chicago. It has also screened at film festivals in Los Angeles, Trenton (NJ), San Antonio, the Dominican Republic, Buenos Aires, and Barcelona.

It’s a modest little film shot over the course of just one afternoon and evening but the message it carries is poignant. It’s also a film that I’m very, very proud of. I hope you enjoy it (your feedback is welcome!).

The Candle: A Short Documentary Film about the Power of Art (and Family) from DanPerezFilms on Vimeo.

Here’s a version of the film subtitled in Spanish…

The Candle [La vela] from DanPerezFilms on Vimeo.

Marthalicia, yours truly, Jorge & Tomas wrapping up our video shoot sometime after 1:00am… 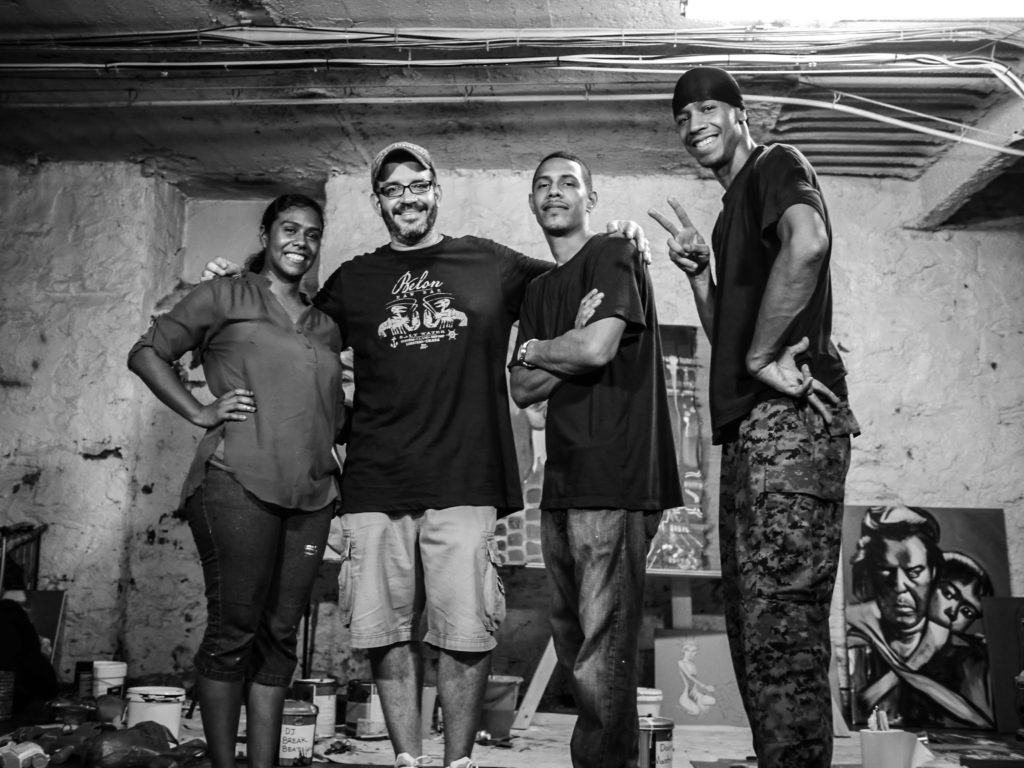