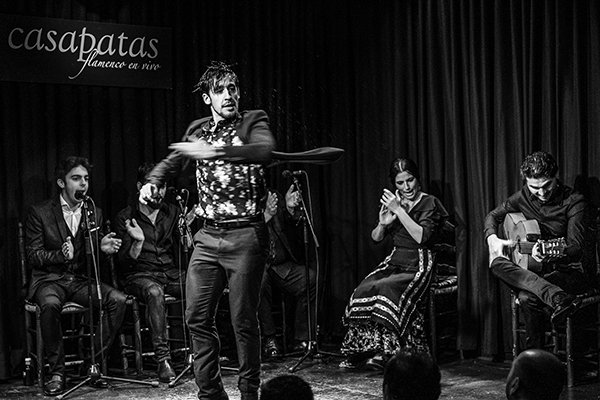 First of all, Happy New Year, everyone. Been a while since I posted any new posts but as some of you already know, I’ve had a rough past couple of months (more on that in a future post). So with the holidays coming up, I decided a trip to Spain with my daughter would be just what we needed to keep our spirits up. We started in Madrid, drove down to Córdoba, then continued south to Gibraltar, then up to Cádiz, Jerez de la Frontera, Seville, up to Salamanca, then Santiago de Compostela in Galicia, Spain where we spent our first Christmas without my wife surrounded by “miña familia galega”. It was a most memorable trip and I’ve got plenty of photographs and video so let’s get started, yes?

Now when in Spain, I’m doing the Flamenco thing. Love the drama, passion and melancholy of it all. Flamenco is an artistic expression fusing song (cante), dance (baile) and musicianship (toque) and has been recognized by UNESCO as an ‘Intangible Cultural Heritage of Humanity’. And there are few places in Spain where this artform is better represented than Casa Patas in Madrid. Founded in 1985, Casa Patas has been the cultural focal point of the Madrid flamenco scene from its inception.

So during my trip to Spain last month, I spent one night in Madrid and didn’t waste it. Made reservations (a must) a good month in advance (had dinner there before the show as well – highly recommended) and accompanied by my daughter and armed with the Fujifilm X-T3 and a few good lenses, I was ready to go. Oh yeah, because of all the buzz the Fujifilm X-T3 has received since it hit the market back in September of 2018 (especially the video capabilities), I rented the camera specifically for this trip (the good folks at Fujifilm made me an offer I couldn’t refuse). And wow. Nothing against my Lumix GH4 (it’s been very very good to me) but the autofocus on this camera is so far superior – especially in low light. Shooting at Casa Patas was the first real test I had with this camera and I wasn’t disappointed. I think the photographs speak for themselves.

Check out the full image gallery over at my new photography site DanPerezPhotography.com