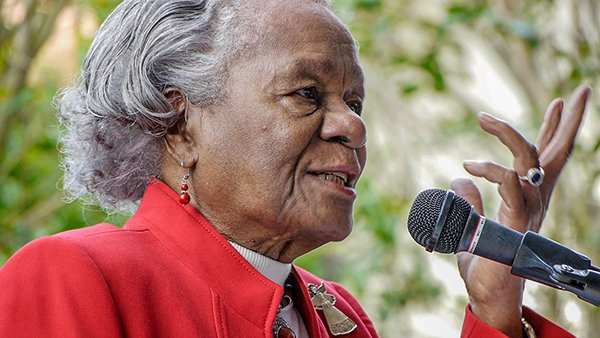 On January 20, 2016, the ribbon-cutting ceremony was held for the new Gibson Plaza, a five-story low-income housing complex in the West Grove for residents with a minimum age of 55 years. The complex is made up of 56 apartments (1-2 bedrooms), exercise room, library and computer lab and an educational facility that will serve residents and members of the surrounding community. Miami-Dade College will provide noncredit courses and workforce training for all Coconut Grove residents.

A historically Bahamian neighborhood, Gibson Plaza, at 3629 Grand Avenue, is the West Grove’s first major multi-family residential development in five decades. The project was made possible by a partnership between the Theodore Roosevelt Gibson Memorial Fund, the Collaborative Development Corporation, Pinnacle Housing Group, and Miami-Dade College through the Mitchell Wolfson, Sr. Foundation.

At the center of it all was 89 year old Thelma Gibson, President of the Theodore Roosevelt Gibson Memorial Fund, Inc., named after her late husband, a reverend and Miami Commissioner during the 1970s and 1980s and a longtime community activist of Black Coconut Grove. Thelma was born in Coconut Grove in 1926. At that time, Coconut Grove was divided into “Colored Town” and “White Town”. Gibson lived in “Colored Town” and her parents’ house on Charles Street had no electricity or running water.

In August of 1947, she became a registered nurse specializing in operating techniques and worked in the “Colored Wards” of Jackson Memorial Hospital in Miami. She earned her B.S. degree in nursing education at the University of Miami in 1959 and in 1984, she founded the Women’s Chamber of Commerce of Dade County. In 2000, she founded the Thelma Gibson Health Initiative (TGHI), a 501(c)(3), not for profit that addresses the health care disparities and educational challenges that undermine the quality of life in underserved communities like the West Grove.

Over many years, she and her late husband managed to buy 11 lots from their neighbors, and it is on that land, now owned by the Theodore R. Gibson Memorial Fund, that Gibson Plaza was built.

I was contracted to create a short video of the ribbon-cutting ceremony which was attended by City of Miami Mayor Tomás Regalado as well as Eduardo J. Padrón, President of Miami Dade College and Miami-Dade County Commissioner Xavier Suarez, who helped allocate $9 million in Better Community Bonds aimed at kickstarting development in the west Grove.