MoMA The Museum of Modern Art, NYC (In Pictures) 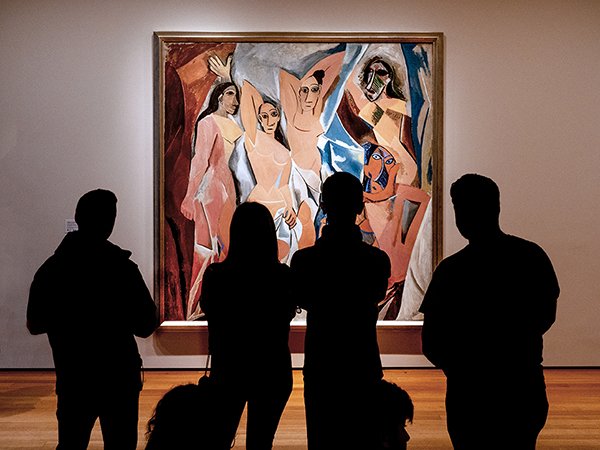 Was back in New York City with Mrs. Perez last week for a quick weekend getaway; primarily to catch lo-fi folk/rock act Waxahatchee at Le Poisson Rouge in the West Village (check out the pics HERE). With the weekend rain dragging into Monday, we decided that a visit the only major art museum open on a Monday would be the perfect way to spend the afternoon, so we hopped a cab to NYC’s famed Museum of Modern Art. We had been there several years ago but brought my mother along who pretty much laughed her way through the museum (“You call that art?!!!”) and wanted little more than to get out of there as soon as possible. I returned this past week accompanied by Mrs. Perez, my camera and a few good lenses – but first, a little history.

Founded in 1929 by by Abby Aldrich Rockefeller (wife of John D. Rockefeller, Jr.) and two of her friends, Lillie P. Bliss and Mary Quinn Sullivan, the Museum of Modern Art officially opened on November 7, 1929, nine days after the Wall Street Crash(!). It was housed in six rooms of galleries and offices on the twelfth floor of the Heckscher Building at 730 Fifth Avenue (corner of Fifth Avenue and 57th Street). At the time, it was America’s premier museum devoted exclusively to modern art, and the first of its kind in Manhattan to exhibit European modernism.

Former New York Governor and Vice President Neslon Rockefeller became president of the museum in 1939 and that same year MoMA opened to the public in its new (and present) location on 53rd Street. The new location was renovated and designed by the modernist architects Philip L. Goodwin and Edward Durell Stone (Stone’s other notable works include Radio City Music Hall and the John F. Kennedy Center for the Performing Arts in Washington, D.C.).

In 1997, the museum undertook a major renovation and expansion designed by Japanese architect Yoshio Taniguchi with Kohn Pedersen Fox, one of the largest architecture firms in the world. The project, including an increase in MoMA’s endowment to cover operating expenses, cost $858 million in total. The project also nearly doubled the space for MoMA’s exhibitions and programs and features 630,000 square feet of space. The Peggy and David Rockefeller Building on the western portion of the site houses the main exhibition galleries, and The Lewis B. and Dorothy Cullman Education and Research Building provides space for classrooms, auditoriums, teacher training workshops, and the museum’s expanded Library and Archives.

The Museum of Modern Art is considered by many to have the best collection of modern Western masterpieces in the world, including more than 150,000 individual pieces in addition to approximately 22,000 films and 4 million film stills. Since 2012, the museum is open seven days a week and admission costs are $25 for adults, $18 for seniors and $14 for students (children 16 and under are free). TIP: Avoid long lines and buy your tickets online at www.moma.org – you’ll thank me afterwards.

Brought my camera along this time (still photography is allowed) so here are a few photographs of some of the art that caught my eye, enjoy…

Let’s kick things off with “City Dreams” by Congolese artist Bodys Isek Kingelez which consists of sculptures of imagined buildings and cities that reflected dreams for his country, his continent, and the world. The sculptures are created from a range of everyday materials and found objects — colored paper, commercial packaging, plastic, soda cans, and bottle caps — all meticulously repurposed and arranged.

Images from MoMa’s “Toward a Concrete Utopia: Architecture in Yugoslavia, 1948–1980” The exhibition explores themes of large-scale urbanization, technology in everyday life, consumerism, monuments and memorialization, and the global reach of Yugoslav architecture and includes more than 400 drawings, models, photographs, and film reels…

“Edge of Town” (1969) by American artist Philip Guston (1913-1980). Comical hooded Klan figures first appeared in Guston’s works after one of his Los Angeles murals was vandalized by the Ku Klux Klan in 1933…

“The Last Supper” (1986) by American artist Andy Warhol (1928-1987). From Carolyn Lanchner, MoMA Curator of Painting and Sculpture: In differentially vitiated colors, Dove Soap’s logo in rose and General Electric’s in muted blue announce their presence at the holy scene. God, having separated light and darkness, found his creation to be “good,” and, according to its slogan, GE, with beneficent intent, “brings good things to light.” And did not the Holy Spirit descend upon Jesus at his baptism in the form of a dove? One might suspect a radically recast, reimagined transubstantiation. The much more brightly colored price tag of fifty-nine cents is more difficult to justify; might it be the cost of a Woolworth’s copy of The Last Supper?

More than three thousand Bell-47D1 helicopters were made in the United States and sold in forty countries between 1946 and 1973, when production ceased. Its designer, Arthur Young (1905-1995), was also a poet and a painter and consciously juxtaposed its transparent plastic bubble (made in one piece rather than in sections) with the open structure of its tail boom. The bubble lends an insectlike appearance to the hovering craft, which generated its nickname, the “bug-eyed helicopter”. This was the “whirlybird” featured in the M*A*S*H movie and television series.

One of my faves from the MoMA, Belgian surrealist artist René Magritte’s peculiar “The Menaced Assassin” (1927)

One of the most recognized pieces of art in the world, “The Starry Night” (1889), an oil on canvas by the Dutch post-impressionist painter and one of the most famous and influential figures in the history of Western art, Vincent van Gogh (1853-1890). The painting depicts the view from the east-facing window of his asylum room at Saint-Rémy-de-Provence (a commune in southern France), just before sunrise…

Mrs. Perez snapping a photo of Jackson Pollock’s “Easter and the Totem” (1953)

“Goldfish and Sculpture (1912) by Henri Matisse

Young woman snaps a photograph of yet another work by Henri Matisse, “Dance (I)” which is a preliminary version of a painting made by Matisse in 1909 at the request of Russian businessman and art collector Sergei Shchukin. The final version of the work, completed in 1910 and named “Dance (La Danse)”, resides in the Hermitage Museum in St. Petersburg, Russia.

Before we knew it, MoMA was closing and this security guard here looked like he was ready for a nap. Another work by Matisse (yeah, I really liked his work) “L’Atelier Rouge” (1911) hangs in the distance…

Our visit to the Museum of Modern Art was over after just over three hours. Happy we returned to this gem of an art museum. We’ll be back…

I’ve got a thing for art museums. Whenever I travel, I’m always looking for an art museum to visit – and I’ve been to a few. Besides the MoMA, check out my images from The Solomon R. Guggenheim, The Whitney Museum of American Art, the Brooklyn Museum and the Metropolitan Museum of Art in New York City. I’ve also visited Nacional Centro de Arte Reina Sofía and Thyssen-Bornemisza Museum in Madrid, National Gallery of Bosnia and Herzegovina in Sarajevo, Norton Museum of Art in West Palm Beach, Museo de Arte de Ponce in Puerto Rico, National Museum of Art of Romania, and the Museo Nacional de Arte and Museo Soumaya (which replicated the spiral design of the Guggenheim) in Mexico City. Yeah, I’ve got a thing for art museums.