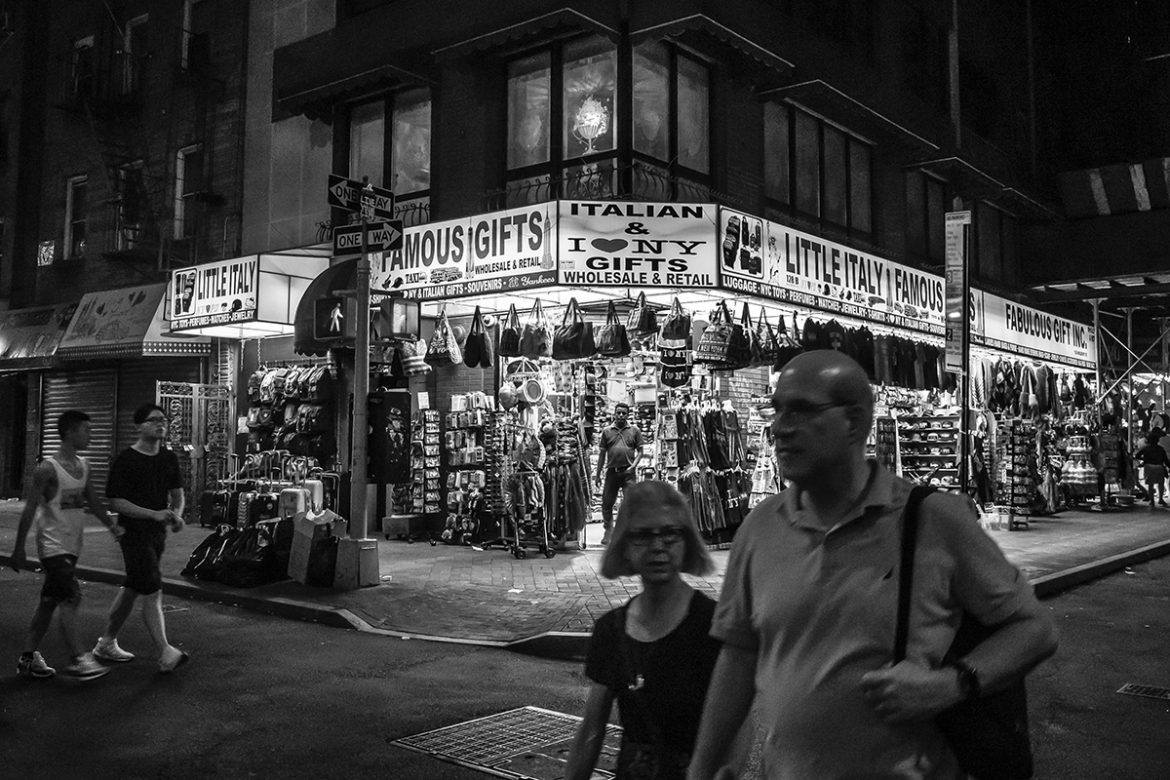 DID YOU KNOW that between 1870 and 1915, New York’s population more than tripled, from 1.5 million to 5 million? At its peak, the Lower East Side (in the southeastern part of the New York City borough of Manhattan) was one of the most densely populated places on Earth, with 500,000 people crammed into four square miles. It soon became the first American slum in 1880 with 37,000 tenements housing nearly 1.1 million people, mostly one or two room apartments with no running water and bedrooms often without any windows at all.

During this time, mass immigration from Italy led to a large settlement of Italian immigrants in lower Manhattan. This area became known as Little Italy, once the epicenter of Italian American culture, encompassing 30 city blocks. By the late 1930s, Little Italy was 98 percent Italian and Mulberry Street (named after the mulberry trees that once lined Mulberry Bend) is often described as the Main Street of Little Italy.

On the left, one of the more iconic photographs of Mulberry Street at its teeming, turn of the 20th century peak taken by the famed documentarian Jacob Riis in 1900. On the left, Mulberry street today by award-winning photographer Jeff Chien-Hsing Liao. Jacob Riis (1849–1914) was born in Ribe, Denmark and immigrated to New York on a steamship in 1870. Upon his arrival in New York City, Riis struggled his way through various jobs — ironworker, farmer, bricklayer, salesman — all jobs that gave him an up-close look at the less prosperous side of the American urban environment.

Riis landed a job as a police reporter with the New York Evening Sun and worked in the poorest, most crime-ridden areas of the city. These were generally neighborhoods where immigrants lived in deplorable tenement houses. He began to bring a camera with him to document what he found in these neighborhoods, and the conditions in which these people lived. He is known for using his photographic and journalistic talents to help the impoverished in New York City; who were the subject of most of his prolific writings and photography (you can see more examples of his work HERE).

As for Little Italy, the population began contracting dramatically starting in the 1950s, when large numbers of the middle and upper classes moved to the growing suburbs. Rising rents and changing demographics (most notably the expansion of Chinatown) have contracted it further and today its core is centered on the restaurants and food shops of Mulberry Street between Canal and Spring Streets.

During our family trip to NYC earlier this month, we checked into the Solita Soho Hotel our first day there (I was attending a show at Le Poisson Rouge later that evening and the hotel was walking distance from it). The Solita (a very friendly place to stay in NYC if all you’re looking for is a place to lay your head at night) is also walking distance to what is left of Little Italy and on our second night, we walked over to Mulberry Street for dinner (outdoor garden at Da Nico Ristorante, great food and atmosphere). When we came out of Da Nico’s, I noticed the streets were closed to vehicular traffic and bustling with people. After walking for about a block, I quickly headed back to our hotel room for my camera. Why? Well, I’ll let the photographs speak for themselves…

Sure, there are probably more souvenir shops than restaurants but Mulberry Street (between Canal Street and Broome Street) still retains the quickly disappearing remnants of its past. Mulberry Street is closed to vehicular traffic on weekends from 5pm-midnight through Sunday September 9, 2018 for Little Italy Pedestrian Mall so if you haven’t visited this iconic street (it was our first time), make it a priority to have dinner there (and walk the streets afterwards) on the weekend.

Oh, and the Italian-American festival of the Feast of San Gennaro (which began in 1926) still takes place there (this year September 13-23) with the entire street blocked off to vehicular traffic for the street fair. It is the largest Italian-American Festival in New York and possibly the United States. The 11-day festival includes live music, carnival games and most of all food! I just might see you there…