The National Museum of Art of Romania (In Pictures)

Anybody who knows me knows very well how much I love visiting art museums (and how much I love dragging Mrs. Perez and my teenage daughter to them). From the Perez Art Museum and the Norton Museum of Art right here in South Florida to the Metropolitan Museum of Art in New York to the Museo Nacional de Arte and the Museo Soumaya in Mexico City. If there’s an art museum in any city I visit, I’m gonna make the time to pop in and check it out.

So when I traveled to Romania recently and spent a day in the capital city of Bucharest, I stopped by the country’s largest and most impressive art collection, the National Museum of Art of Romania (Romanian: Muzeul Național de Artă al României). The museum is located in the former royal palace in Revolution Square, on the famed Calea Victoriei (Victory Avenue). Completed in 1837, the National Museum of Art of Romania features collections of medieval and modern Romanian art, as well as the international collection assembled by the Romanian royal family.

The museum is split into two parts, the National Gallery (which features only Romanian art) and the European Gallery (I visited only the Romanian art gallery – I mean, I was in Romania, right?) . There is separate admission for each gallery or you can pay to view both (20 Lei, about $5). Photographs are allowed but only after paying a rather hefty fee of 100 Lei (about $25) which I paid (how else would I be able to share how awesome the museum was?). It isn’t MOMA (how many art museums are?) but the National Museum of Art of Romania was a splendid museum with many fine pieces of art and well worth the few hours me and Mrs. Perez spent there. 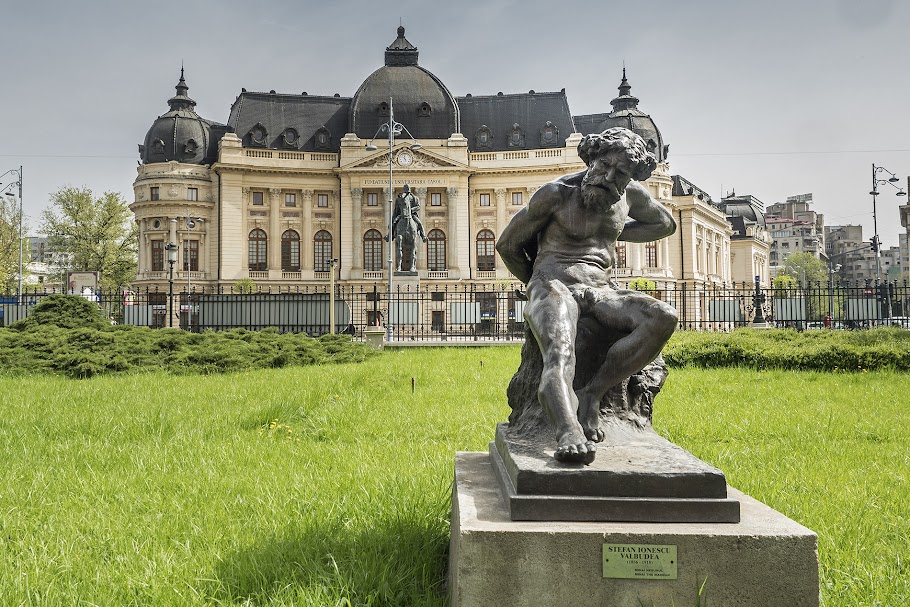 Upon entering the grounds of the museum, which is right across from the statue of Carol I and Revolution Square, you’ll find a sculpture of ‘Mihai the Madman’ by Stefan Ionescu-Valbudea (1856-1918)

Also on the grounds outside the museum, you’ll find ‘Izvorul’ (The Spring) by by Romanian sculptor Ioan Georgescu (1856-1898) ‘The Spear Thrower’ by Ion Georgescu

Mrs. Perez admiring ‘Toujours du Baudelaire’ by Theodor Pallady (1871–1956). A museum bearing his name is situated in one of the oldest surviving merchant houses in Bucharest, Romania and holds over 800 paintings and drawings by the Romanian artist…

‘Portrait of Maria Nacu’ (Portretul Mariei Nacu) by Nicolae Grigorescu (1838-1907), one of the founders of modern Romanian painting

Ion (Nicu) Irimescu’s ‘Girl with Grapes’ in the foreground and in the background, ‘Harvesters at Rest’ by Camil Ressu (1880-1962), one of the most significant art figures of Romania

‘Portrait of a Man’ by Marcel Iancu (1895-1984), the co-inventor of Dadaism and a leading exponent of Constructivism in Eastern Europe

‘Lorica with Chrysanthemums’ by Ștefan Luchian (1868-1916), famous for his landscapes and still life works. Paralyzed and confined to an armchair by Multiple Sclerosis at age 31, Luchian was no longer able to hold the painter’s brush with his fingers and had to have it tied to his wrist in order to continue working. This was his last painting, he would die 3 years later…

‘The Prayer’ by Constantin Brâncuși (1876-1957), considered a pioneer of modernism and one of the most influential sculptors of the 20th-century. Brâncuși is called the patriarch of modern sculpture.

Oh, and the photograph at the very top of the post is a bust of Bogdan Petriceicu Hasdeu, a Romanian writer and philologist (the study of language in written historical sources) by Carol Storck

Bucharest, Romania: “The Paris of the East” (In Pictures)