A Dog’s Life: The Importance of Showing Up 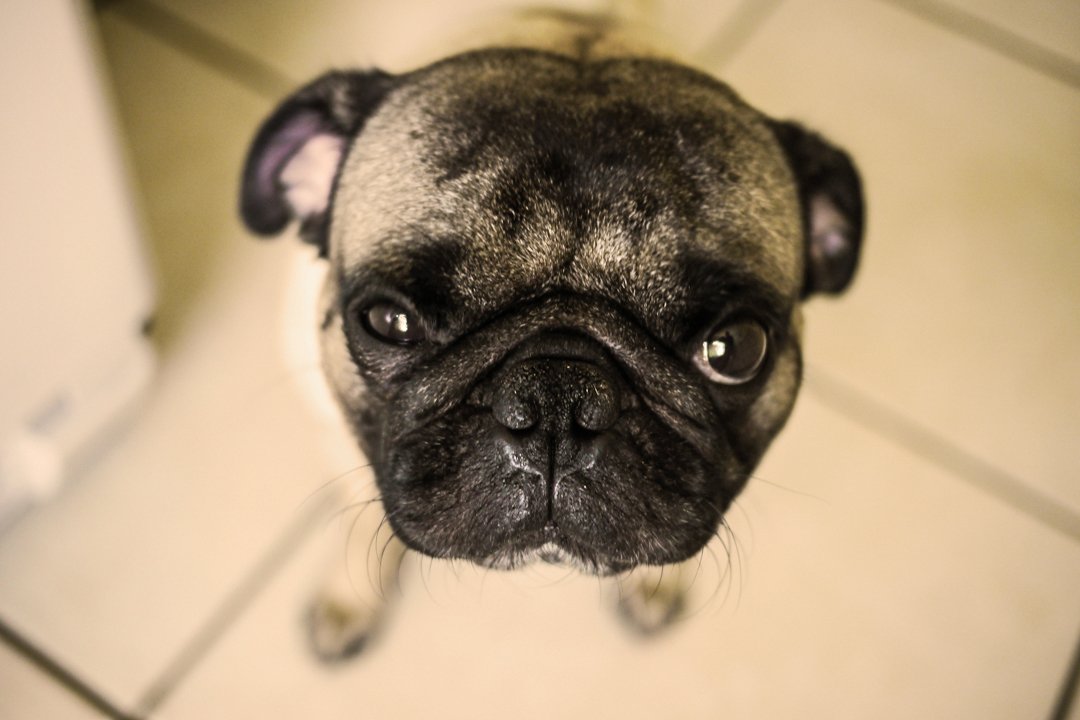 This is a special guest post by Buddy (The Mischievous Pug)

As a pug, I live a pretty good life. The so-called master of the house, a tall, dorky-looking fellow, treats me well enough. He takes me outside every day so I can do my “doggie business”, gets me my food and fresh water, and doesn’t bother me too much other than shoo me away when I’m gnawing on my doggie bone on one of his shoes (it appears I have a tendency to slobber just a bit when I do that). He’s no Cesar Millan but overall I guess I can do a lot worse than him for a master.

Not long ago, I strolled into the kitchen while he was making himself a sliced turkey sandwich. Now, I usually get a doggie treat every now and then if I do something cool like sit, stay, come when I’m called, or give up my paw (you humans impress way too easily). I rarely, however, get any of the food that my master and his family eat except when it accidentally falls on the floor and I run and snatch it up. This turkey smelled damn good, though (tomatoes, red peppers, a hint of cumin; Southwestern flavor, perhaps?). A dog gets tired of the same dry dog food all the time; is it too much to ask to get some fresh meat every now and then? 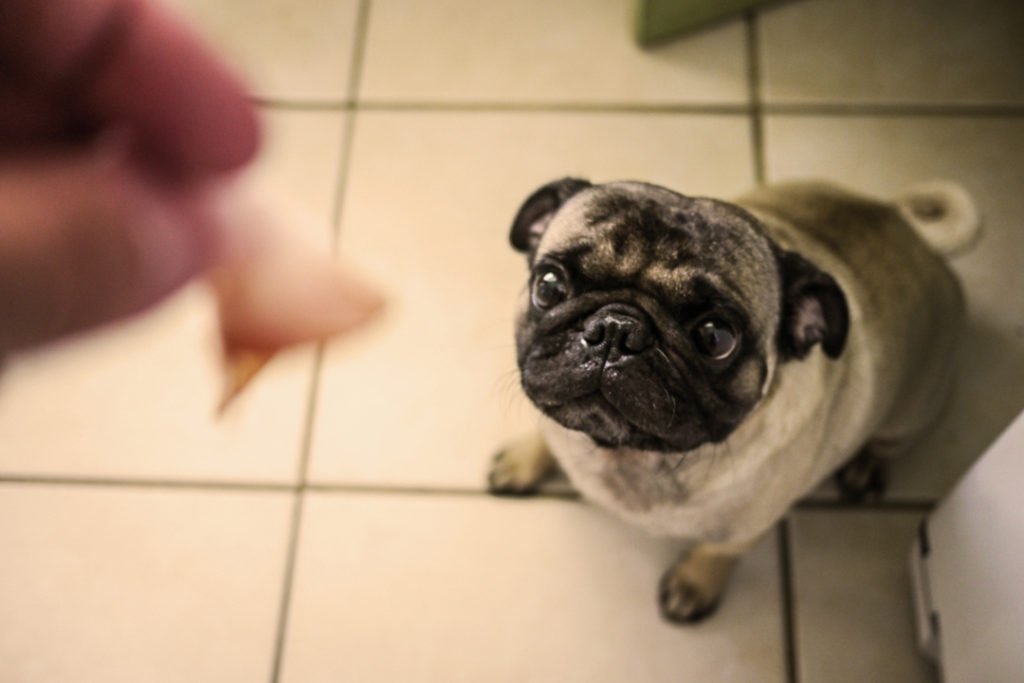 So I sit down at my master’s feet and look up at him with the most adorably pathetic face I can muster. It ain’t hard (it’s something us pugs are born with) and I’m hoping my master will feel sorry for me enough to toss me a slice of turkey. My master looks down at me and asks, “You wanna slice of this, Buddy?” He dangles a piece of sliced turkey a few feet above me. I perk my ears up, open my eyes a little wider, give the tail a good wag, send him all the right signals [Yes! I want some of that!]. After looking down at me for a few seconds, he pulls the slice of turkey back, chuckles, and says, “You probably couldn’t handle that.” The bastard. I give him dirty looks the rest of the day and avoid the powerful urge to pee in one of his sneakers.

A few days later, I hear my master rustling in the refrigerator again. I head over to the kitchen and see he’s making himself another turkey sandwich. Now, unlike most humans, us dogs have very little dignity so I figure, what the hell have I got to lose? I get into position again seated near his feet and look up at him with my adorable pug face. He looks down on me again and asks, “Are you here for another piece of turkey, Buddy?” [No, dumbass. I’m here because I was getting tired of napping on my ridiculously comfortable memory foam doggie bed!]. He dangles a piece of sliced turkey just above my head again. I give him all the right signals: ears are pointed up, eyes wide, tail wagging. He lowers the slice of turkey to my mouth and says. “OK, here you go, but don’t get used to it.” The turkey is as good as I thought it would be (definitely Southwestern flavored). He doesn’t notice it, but I’m smiling. 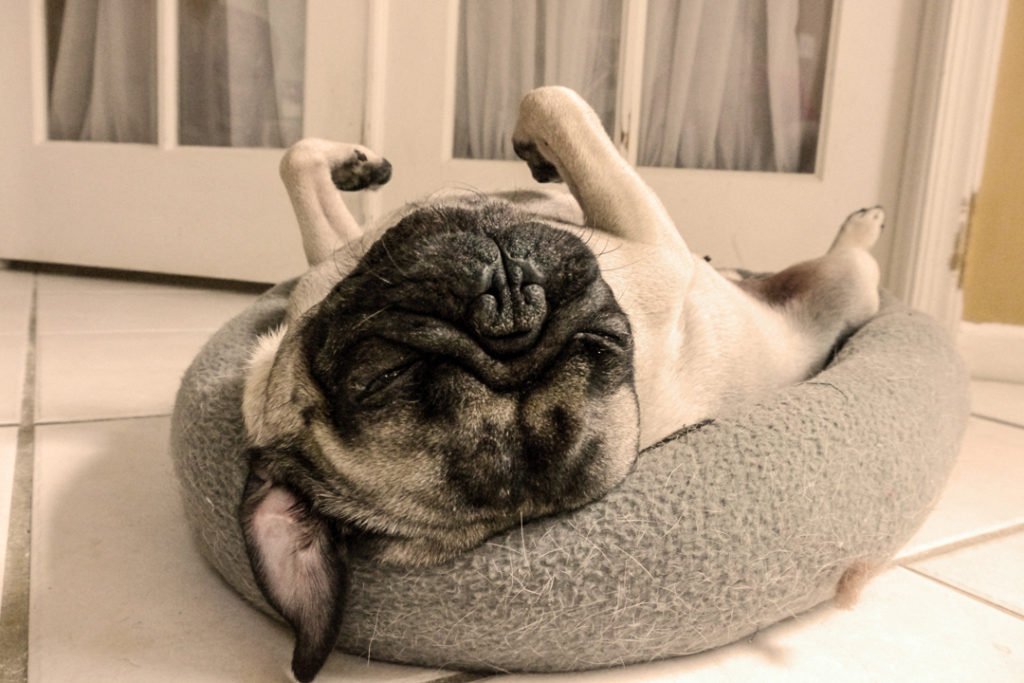 Since then, every time I hear my master rustling in the refrigerator, I head on over there and give him “the look”. I don’t always get what I’m after but every now and then he tosses me a slice of turkey; or a chunk of last night’s grilled chicken, a piece of ham, even a doggy treat. I don’t always get something but if I just show up, there’s a chance I just might. And when I do get something, I forget about all the other times I didn’t (us dogs have a pretty crappy memory anyway).

Lesson learned? If you lie around on your doggie bed scratching yourself all day, nobody’s gonna bring you a damn thing. But if you just show up where the action is and give off the right signals – hell, you never know.

Are you showing up? Woof!

EDITOR’S NOTE: Buddy is a mischievous pug who calls South Florida home. He enjoys napping, eating, peeing, pooping, drinking out of puddles, lying in the grass, and napping some more. His master is rumored to be award-winning filmmaker Dan Perez.

Rett Syndrome: The leading cause of severe impairment in girls

So I’m sitting here, sipping my coffee and reading through the Sunday morning posts on Google Reader, and the last thing I expected when I started reading this one about an adorable dog was to gain an insightful metaphor for life on top of all the cuteness.

And no, I don’t think I’m showing up enough. Touche, Buddy.  Touche.

Katie,
There’s so much more to Buddy than his adorable pug looks. Not a whole lot more but there’s more…
Glad you enjoyed it 🙂

Actually, you present the simplicity of getting results in a fabulous way. I’m honored to have met Buddy and love having you show up at #DadChat with your excellent wit, humor, and cynicism!

Bruce,
Now I can “add value” to #blogchat by illustrating the importance of adding pictures to your blog, yes?
Thanks for the kind words – much appreciated. Buddy says, “Woof!” (I think he’s saying “Thanks!” but I’m not quite sure)

Well said Buddy. I think we all need a reminder about getting off our butts, and out of our comfort zones! Keep showing up little guy, and I will keep watching your vids and encouraging Dan to pay up!

Buddy gets food, shelter, & a doggy bed – what more could he want? 🙂

Buddy, you have a ruff life.

A cute dog could tell me to show up on the surface of the sun in a snowsuit and I would probably take a moment to consider it, as animals are the way to my heart (yes, I have one.)

I enjoy Buddy. He is wise beyond his canine years, and also food-motivated. We have a lot in common.

Buddy wants to know what you’re doing this Friday night…

I have a chocolate lab and this EXACT same exercise has definitely happened at my house! 🙂 Loved the story and the lesson behind it. Oh, and the photos? Amazing!

Laura,
Glad you enjoyed the post. Now, get your lab to write his own blog post. Buddy thinks he’s the only dog blogger on the planet…

Buddy I am so glad your owner FINALLY allowed you to reveal your true wisdom on his blog.  I love the fact he is allowing your multi-channel talent out of the doggie house.  He could really learn a few things hanging out with you…. Your right but let’s hope 😉

Buddy so glad you convinced your owner to finally allow you to guest post what a nerd, took him this long to allow your multi-channel wisdom to escape the doggie house.  Maybe he can learn a few things if he keeps hanging out with you…. you’re right be at least we can hope.  I really enjoy your video messages you really are quite talented, i mean you are amazingly awesome.

I already know how to drink out of puddles and I occasionally pee on my own leg. There ain’t a whole lot more I can learn from Buddy 🙂

Game’s up Dan. Time to turn the blog over to Buddy, full time. Maybe he’ll throw you a scrap with a guest post here or there?

Buddy naps way too much to maintain any real blogging schedule…

I work in sales and marketing and this lesson never gets old. It gets ignored, but not old. Thanks for the reminder! I’m thinking of employing Buddy’s big eyed begging look on my next client.

Angie, I worked as a Sales manager and Director of Sales & Marketing in the catering/special events industry for 10 years before starting out my video production business. I know exactly what you mean.
Always nice to see a “real” writer grace my modest blog 🙂

Are you trying to make ME cry like one of thos Biggest Loser people? 😉 I’m glad to have found you.

Ah Buddy! You must know our guinea pig, Jane.  Jane has begging down to a science.  And she knows just who is vulnerable to it.  (Hey Bill, you always complain I don’t talk about when I blog, here you go!) Jane knows Bill (my husband and occasional co-blogger) is a big marshmallow at heart–a few little pleading noises, a quick race around the cage, standing up on my hind legs saying ‘hey Bill, it’s time for me to eat!’  Now the best thing about him is unlike the rest of the family he’ll give me some fruit, refill my seed AND give me some hay all at the same time. Nothing like getting huge helpings of love from my owner! But you’re right Buddy, if I sit in my corner all day and don’t come out and perform, alas, I don’t get fed quite as well.  (this isn’t to say I’d be underfed, I’d just be the size of a small cat, not a big one!) Now that I see you’ve gotten some ink, I’m going to insist on some too–I take such cute pictures!

How often does your master take you for a stroll down Lincoln Road? With a face like that, you should score easily among the canines!

Buddy, you are too cute for words.
Here’s a secret: pugs are my FAVOURITE.

also, there’s a lot you can learn from dogs. Dogs know how to live.

And you, of all people, should know that 🙂
Thanks for taking the time to stop by. Woof!

Love it… very funny and true. He’s a cute dog. Tell him thanks for the valuable lesson. 🙂

pugs are super cute. but in my experience, super hyper. and i need a dog to lay around the fire all day and keep my feet warm knowwhatimean?   i need a dog that can’t out run me, which means, they can only walk.

But, your dog seems like awesomesauce, And he does have a good owner. Or so I hear.

Hilarious! I just shared a story about life with our dogs on my blog, http://mecwrites25.wordpress.com, funny how dog and other animal lovers can relate to each other.
I will be following your blog, I had a smile on my face the whole time I was reading. BTW, I also live in la Florida,gulfcoast side, and hail from Panama. Felicidades!

Why kind of camera do you use?