The 10 Greatest Classic Thrash Metal Albums of All Time

I was just a teenager. A stupid teenager. 13 years old. I loved classic rock music. Billy Joel, Foreigner, The Police. Suddenly, “as a whirlwind swoops on an oak”, I’m listening to Metallica, Slayer, and Mercyful Fate and making my mother nuts. I was a hardcore “Metal-Head”.

I do remember stumbling onto to the popular syndicated radio show “Metal Shop” which played Sunday nights on rock station WNEW in New York (where I grew up). I got turned on to acts like Judas Priest, Iron Maiden, and Black Sabbath and then a metal-head friend of mine in high school turned me on to the “Hell Hole” underground heavy metal college radio program broadcast from NYU Tuesday nights at 9pm.

My childhood buddy Jose, who lived in the same building as I and shared my newfound thirst for the darker side of music, and I would listen to the show every week and then I’d head over to his apartment after school the next day and we’d listen to the songs over and over (he had a cheap radio with a tape player and would record the program). I distinctly remember listening to Slayer’s “Captor of Sin” on that radio program. There was no turning back after that.

Heavy Metal, Thrash Metal, and Death Metal were busy being born during that time (early 80’s). No other music like it had ever come before (how often can you actually say “I’ve never heard anything like this!” today?). It was an exciting time for music and my buddy Jose and I were right there at its dawn. Those were good days.

So, in order of importance, here they are: 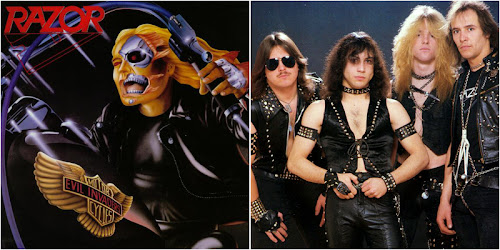 Hailing from Canada, Razor never achieved the popularity of fellow thrash acts like Slayer or Exodus but when it comes to hardcore Thrash Metal, it doesn’t get better than this. Guitarist Dave Carlo’s violent riffs will make your bones hurt. Vocalist Stace “Sheepdog” Mclaren’s grizzled voice and soul-piercing shrieks have to be heard to be believed (check out “Speed Merchants” and see if I ain’t lying). The production is raw and filthy and with lyrics like “we spit on those who choose to pose, we thrash with all the rest”, how can you go wrong? Oh, and for those of you wondering why the Thrash Metal classic “Bonded By Blood” by Exodus didn’t make my list (it was close), you should only need to listen to the superior “Evil Invaders” once to know why it made the cut. 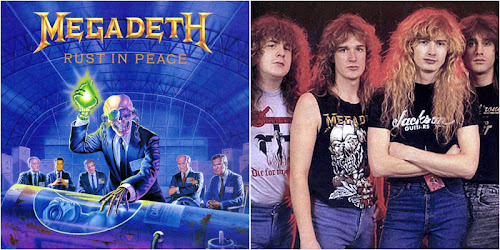 Having been kicked out of Metallica, Megadeth frontman Dave Mustaine started Megadeth with a vengeance. Despite existing in Metallica’s shadow for the past two decades, you can make a very strong argument that Megadeth’s first five albums can easily go “mano-a-mano” with Metallica’s first five. This album is arguably Megadeth’s masterwork. The riffs and guitar solos (many of them; at any time; coming from everywhere) are simply unbelievable at times. Mustaine’s usual brilliant songwriting covering everything from religious warfare, to government conspiracy, to nuclear apocalypse. This is the definition of a classic. 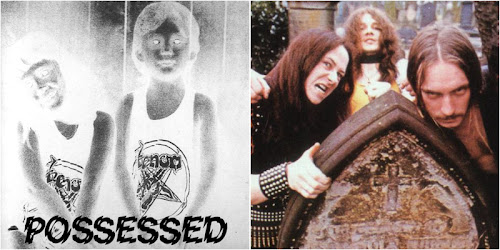 After releasing classic albums like “Welcome To Hell” and “Black Metal”, Venom’s fourth effort, “Possessed”, tends to get overlooked which is a shame considering it’s their most interesting and inventive album. After years of fighting with their record label and each other, “Possessed” is the sound of the band burning out like a supernova. With their typical muddy production, Venom introduce a dark, disarming melody atypical of their earlier albums without losing an ounce of their fierce energy. From the opening assault of “Powerdive” to the filthy chords of “Too Loud (For the Crowd)”, “Possessed” is the sound of one of the most influential Death Metal bands desperately trying to be taken seriously; trying to reinvent itself somewhat…and succeeding. 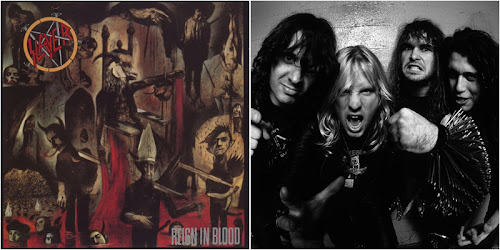 Coming in at just under 30 minutes, Slayer’s “Reign In Blood” took the Heavy Metal world by storm. Considered by many to be the ultimate Thrash Metal album, it still packs a wallop today. It’s not just the fierce buzzsaw riffing by guitarists Jeff Hanneman and Kerry King or lead singer Tom Araya’s angry vocals or Dave Lombardo’s manic drumming but the crisp production by hip-hop producer Rick Rubin (you heard right) who, along with Russell Simmons, convinced the band to break their contract with Metal Blade Records and sign on with Def Jam. Rubin hired engineer Andy Wallace, who he worked with on the Run-DMC/Aerosmith collaboration “Walk This Way“, and produced an album that not only raised the bar for the genre but sounded so damn good. 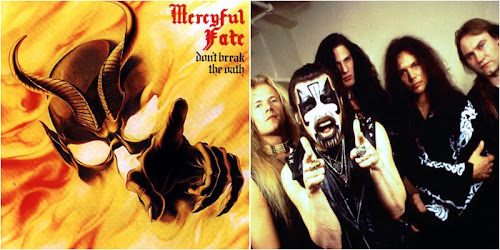 Founded in Copenhagen, Denmark in 1981, Mercyful Fate, fronted by the sinister King Diamond, were a major influence in the Death Metal scene despite having a sound that was more in the tradition of Iron Maiden and Led Zeppelin than Metallica or Slayer. Not to say that Mercyful Fate didn’t deliver a hellish dose of crunching guitar riffs but their killer production (the album sounds terrific even today), outstanding musicianship, and King Diamond’s demonic midrange growls and spindly falsetto put them in a class all by themselves. Guitarists Hank Shermann and Michael Denner rank right up there besides Judas Priest’s Downing/Tipton and Iron Maiden’s Murray/Smith. They combine to produce catchy riffs that retain their menace and guitar solos that will send most other guitarists back to music school. As King Diamond wails in one of the albums standout tracks “A Dangerous Meeting”:

“Oh, they should have known,
Not to play with the powers of hell!” Indeed. 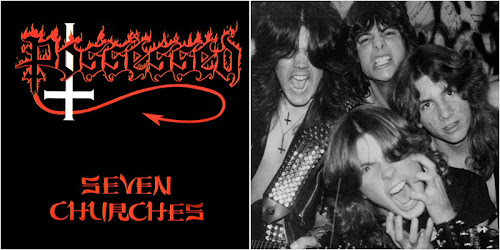 Hailing from San Francisco, Possessed released one of the most evil, raw, and brutal albums ever heard when they unleashed “Seven Churches” on the budding Death Metal scene in 1985. Hellish guitars and drums that pummel you with speed and aggression coupled with Jeff Becerra’s guttural vocals gave Death Metal its identity. Despite the album’s aggressive sound and filthy production, it shined with musical cohesion. With song names such as “Pentagram”, “Burning in Hell” and “Satan’s Curse”, it was the kind of album that made you feel like you wouldn’t be let into any church ever again. Many bands have tried to top the extreme nature of this groundbreaking album only to come off sounding strained and even comical. The original is still the best. 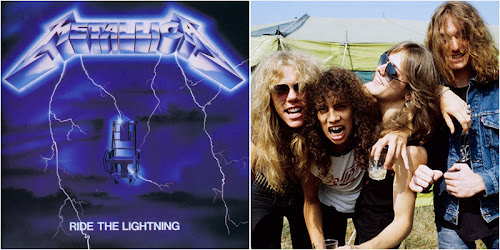 Despite “Master of Puppets” being Metallica’s finest moment, “Ride the Lightning” was the more influential album. After the foreplay of the opening track’s gentle acoustic guitar, “Fight Fire With Fire” proceeds to pummel you with riffs that until then had never been heard on record before. This dynamic and desolate album then goes on to lay out the blueprint for what a Thrash Metal album should be. It still stands as a stark reminder of the visceral power and ingenuity Metallica displayed in their early days before degenerating into just another loud obnoxious rock band. 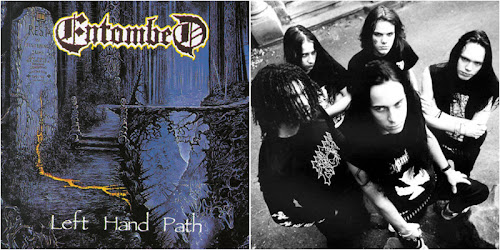 By the time the 90’s had arrived, my interest in all things Metal had begun to dwindle. Mostly because the genre had gotten stale; every new band trying desperately to “out nasty” the great albums that came before it. I crossed over to the Grunge scene thinking Metal had nothing more to offer. Then my old friend Jose turned me on to “Left Hand Path”. I was like “Holy shit.” Hailing from Sweden, Entombed didn’t just build on the classic albums that came before them, they ingested them and shat them out like some disastrous abortion. Chainsaw guitars coupled with a sinister low bass sound and battering drum work blended together to create a hardcore/punk/metal sound that has launched several hundred Swedish Death Metal albums. Throw in lead “singer” LG Petrov’s angry guttural barks and what you have is a Death Metal masterpiece that commits first degree manslaughter on your senses from its opening track. 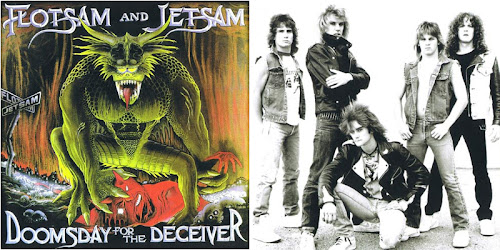 Before selling his soul to join the biggest Heavy Metal act on the planet, Jason Newsted manned the bass (and wrote most of the songs) for Flotsam and Jetsam’s brilliant debut LP “Doomsday for the Deceiver”, perhaps the greatest album of the glorious Thrash Metal era. Their sound was a progressive, almost technical, sonic assault of fierce harmonized riffs, dueling guitar solos that weren’t so much a duel as a bloody knife fight, and frontman Eric A.K.’s powerfully shrill vocals. While many of the other bands of that era tried to create a faster, harsher sound, “Doomsday for the Deceiver” was rife with musical complexity and maturity; raw yet highly polished. It’s as close to a perfect album as was ever released in the genre. And with the release of the gloriously remastered 20th Anniversary Deluxe CD, the album would send most of today’s metal acts scrambling back to the rancid septic tank they crawled out of. It’s also further proof of how badly Metallica squandered Mr. Newsted’s great musical talents. Nuff said. 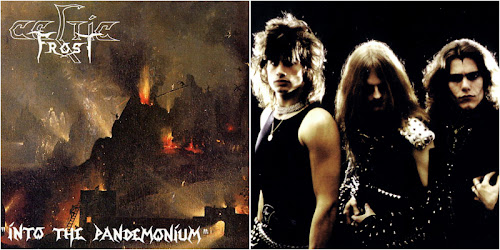 Swiss outfit Celtic Frost are considered one of the godfathers of death metal. Every Norwegian black metal band just about owes their existence to this band. They were at the forefront of the early 80’s European underground metal scene that has since exploded. Their first two albums “Morbid Tales” [1984] and “To Mega Therion” [1985] were as influential as any listed here. Their third offering, however, “Into the Pandemonium” is often misunderstood and grossly underappreciated. The album was as bizarre, ambitious and creative an album as had ever been released in the genre. Creepy strings, Arabic yodeling(!), and ghostly female backing vocals compliment frontman Tom Warrior’s moans and grunts. Oh, and enough power riffs to loosen teeth. From the badass cover of Wall of Voodoo’s “Mexican Radio” that kicks off the album to the boogie groove(!?) of “I Won’t Dance (The Elder’s Orient)” to the operatic “Rex Irae (Requiem)”, “Into the Pandemonium” went out on a huge limb, stretching the boundaries of possibility for a genre that far too often fails to venture out of its comfort zone.

So there you have my top 10 albums. Let the debate begin…