The Greatest Movie Soundtrack of All-Time? 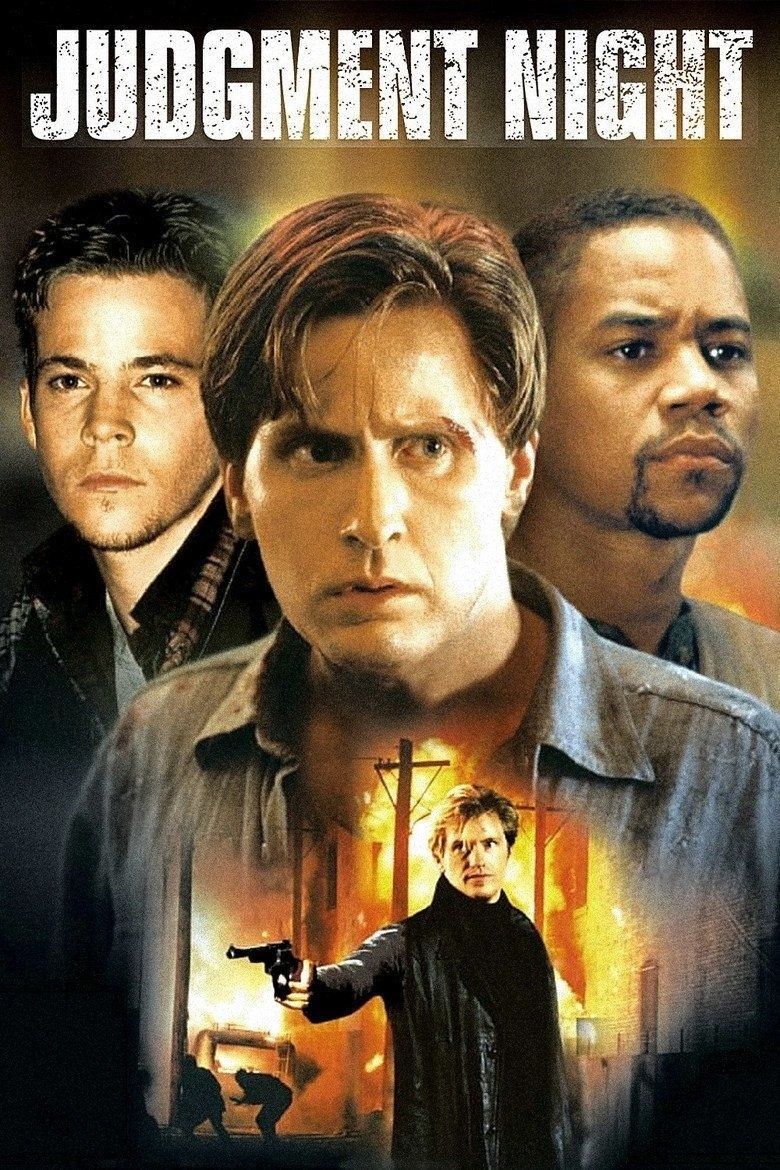 Anyone remember the film Judgement Night? It’s the story of four suburban buddies (Emilio Estevez, Cuba Gooding Jr., Stephen Dorff & Jeremy Piven) on their way to a boxing match who make an ill-fated exit off the highway and end up lost in Chicago’s grim inner city (in a lavish RV no less!). There they witness a brutal murder and end up on the radar of the killer himself (a fine turn by Denis Leary). The rest of the film has the four pals on the run from said killer in a very dimly lit part of town that apparently does not have any police presence or working pay phones. Typical.

The film, directed by the capable Stephen Hopkins in 1993, makes for fine viewing (if plausibility isn’t high on your list of movie requirements) but the story is pretty standard fare – comfortable middle-class types thrown into a hellish urban landscape and forced to fight for their lives. Nothing we ain’t seen before…yes? Its soundtrack, however, was another story. It’s quite remarkable.

Back in the late 80’s to early 90’s, hip-hop music was at its heyday. Acts like Public Enemy, Ice Cube, Pete Rock & C.L. Smooth, Cypress Hill and many others were getting regular airplay on the radio and were the darlings of the popular Yo! MTV Raps TV series. During that same time, another sound had begun to rear it’s ugly head: Grunge. Led by groups like Nirvana, Pearl Jam, Soundgarden & Alice In Chains, Grunge dominated the radio airwaves and MTV throughout most of the 90’s.

Which brings me back to “Judgement Night”. The genius of the soundtrack was that it combined some of the best hip-hop acts of the time with some of the best grunge/hard rock/metal acts. Can you say Slayer & Ice T? Helmet & House of Pain? Mudhoney & Sir Mix-A-Lot? How about Pearl Jam & Cypress Hill? You heard right.

In short, the “Judgement Night” soundtrack was perhaps the finest implementation of the genre unification concept…ever. That’s right, ever. Oh, I know the idea of fusing hip-hop and hard rock has been done before – most notably Run DMC’s collaboration with Aerosmith on Walk This Way as well as Public Enemy and Anthrax on Bring The Noise. But an entire album? Never.

Unfortunately, over the last 10-15 years, hip-hop has become a hollow shell of what it once was. It’s now a bunch of soon-to-be-broke “rappers” flashing their “bling” in front of rented Bentleys while “making it rain” dollar bills over scantily-clad, big-breasted women hanging on to, or in the general vicinity of, a stripper pole. The hard rock scene has also seen a bit of a decline since the death of Kurt Cobain and grunge as we knew it. This is not to say it’s anywhere near what hip-hop (rap) has become but it ain’t what it used to be when Nirvana, Smashing Pumpkins, Stone Temple Pilots, Soundgarden, Alice In Chains, & Pearl Jam dominated most radio stations. And Metal? Metal still drones on, attracting a new generation of fans (mostly teenagers) despite recycling guitar riffs and lyrics that go back 20+ years to its glory days.

So why not revisit an album that captures these musical genres while at their peaks? Like the four friends in the film, get off the main road and get lost for a while in the grim but highly enjoyable musical landscape of the film’s soundtrack. Without the psychotic killer and his evil henchmen trying to kill you, of course.

So what are some of your favorite movie soundtracks? Share them…

[NOTE: This post was first published back in 2010. It still holds as true today as it did then.]

There is no better movie soundtrack. The only one that comes close, in my opinion, is the “A Life Less Ordinary” soundtrack. That film starred Cameron Diaz and Ewan McGregor in a story about a rich girl who is kidnapped by the poor boy and they end up falling in love. Weird movie, but I enjoyed it. That soundtrack has Beck’s “Deadweight”, The Sneaker Pimps “Velvet Divorce”, and R.E.M.’s “Leave”. Just a fantastic soundtrack.All of that said, the Judgment Night soundtrack has been a staple in my music collection since 1997. Kicking off with the grind of Helmet’s guitar’s and ending with Cypress Hill and Pearl Jam throwing down…it’s just perfect in every way. GREAT choice and post.

Matt, thanks for taking the time to read as well as for your comment. Always good to see you in my timeline or commenting on my blog. I actually have that soundtrack and agree that it’s one of the better ones. Another great soundtrack is the one for the dismal “Batman Forever” [U2, PJ Harvey, Method Man, The Flaming Lips, etc).

What set “Judgement Night” apart, however, was the successful merging of the different musical genres (Rap, Heavy Metal, Grunge) – no album up to that time, nor since, was as successful in the genre unification concept. Nuff said.

Produced by Trent Reznor, the soundtrack to Natural Born Killers – one of the most amazing films EVER – easily tops my list! From L7 to Leonard Cohen, Patsy Cline to Patti Smith, Bob Dylan to Dr. Dre – the music itself is awesome and was incorporated into the film in a way few soundtracks are. I know, right? : ) http://bit.ly/aH6CtP

Natural Born Killers? One of your faves? I would have never thought that a (seemingly) mild mannered social media strategist & trainer would consider one of the most violent (and visually stunning) films of all time one of his faves(!) I guess you can learn alot about people from the movies they like!

I agree unreservedly inre to the film (one of my personal faves) and I agree somewhat with the soundtrack (one of the greats). However, the “Judgement Night” soundtrack is more than just a collection of great songs but a merging of several different musical genres – the likes of which had not been seen before…nor since. That’s why it gets my vote as “The Greatest”.

Patrick, thanks for the comment as well as for your continuing support 🙂

Not to mention Tom Sizemore…. lol

I remember not really liking the Judgment Night film when I saw it, and don’t remember the music making an impression on me. But that was then and this is now, so I’ll go back and give it another listen. I’ll cue the platter up on the spindle above my “Apocalypse Now” soundtrack. : )

Dan, First thank for introducing me to this soundtrack, will have to check it out sometime. Guess I have an obvious one: Pulp Fiction. The switch from R&B to disco to funk to whatever really worked, helped Tarantino tell that story, set a certain mood. Like @pbarbanes said about incorporating music into film differently, the PF soundtrack was almost like another supporting character. FWIW.

Davina, that’s what great soundtracks do. Tarantino & Scorsese are big influencers for me when it comes to how they use music in their films. I have spent alot of time on my own films looking for the right songs to help move my story along, raise the energy, or set a mood.

Like the film, the “Judgement Night” soundtrack is pretty fierce, full of explicit language and strong themes but the genre unification concept makes it stand alone IMHO.

Thanks for reading as well as for your comment – much appreciated 🙂

Dan you took it wayyy back with Onyx and Boo Ya Tribe lol Thats awesome. I agree that hip hop is hurting right now.. beside a few lyrical monsters, the rest are garbage. Hip hop has become as bad a marketing plan as boy bands are..

I might have to red box this bad boy.. and relive the it haha

John, wouldn’t have figured you for an Onyx/Boo Ya Tribe kind of guy! Hip-Hop has fallen a looooooong way from its hay day and I think rock music has also seen a decline from where it was in the 90’s (minus the boy bands, of course!)

I agree it is bad now..I dont see it getting any better, selling out is very profitable.

Yes sir,, hope things stay good for your wife too 🙂

The bling and the girls on the stripper poles is what you see on TV and in the mainstream. Nothing is different. Everyone likes to do that thing where everything was better once upon a time but you wouldn’t have heard Paid In Full on mainstream radio when it was new, just like you don’t hear the good stuff now.

Sean, Nothing is different? Maybe you’ve not listened to any old-school hip hop but there are a couple of things that are very different. First is the content. MCs back in the day were the voices of their communities, shedding a harsh light on the drugs, crime, poverty, injustice, etc that was part of their environments. I’m not hearing that today.

Secondly, MCs back in the day could actually rap! Big Daddy Kane, Rakim, Ice Cube, KRS-1, Grand Puba & dozens more would wipe the floor with today’s rappers in a mic battle. I don’t know how old you are but I’m 41 born & raised in the Bronx and I could tell you that yes, it is very different today than it was back then.

I do agree with you that people do like to say how things were better once upon a time, and most of the time, I don’t agree. But when it comes to Hip-hop, how can you not? Unless you actually think Lil Wayne, Rick Ross, Kanye West and the rest of today’s rappers would ever dare show up to a mic battle with the aforementioned MCs.

I do appreciate you checking out the post as well as your comment. Hope to see you back!

You’ll Love the videos Thanks for sharing!!

That’s right, ever. Oh, I know the idea of fusing hip-hop and hard rock!

Its soundtrack, however, was another story. It’s quite remarkable.

I was entering junior high school and loved Guns N Roses. Appetite was my favorite album at that time. But, 1980s, hair metal was watered down as alternative rock bands like REM and U2 became more popular.
Besides Judgement Night, Nevermind was my version of the “Beatles.” A lot of credit goes to Sub Pop and Seattle’s local scene, Butch Vig, Sonic Youth and a hand full of others. We all know the success of Nirvana and Nevermind but one of the things I loved about Cobain, was his constant promotion of his favorite bands and influencers, before his own band. He even paved the rules for Social Media.

Thanks for stopping by – hope to see you back again 🙂

I never saw this movie or heard it’s soundtrack. I took some time to check some of the tracks. I couldn’t resist a song by Cypress Hill AND Pearl Jam!! Both released their debut albums in ’91 and are among my favs. With straight gangsta tracks like Hand on the Pump, Phuncky Feel One & Real Estate I really had no business listening to & much less owning that album. I was just a little older than Miranda is today!!

Thanks for putting me on to the soundtrack. Cypress Hill & Sonic Youth had a great one also. A good mix of two different worlds.

The two tracks with Cypress Hill are also my faves (we must be related or something!)

I’m completely agree with you. The fusion between these two styles was amazing. Open mind!!

Best dark horse movie soundtrack of all time? “The Cable Guy.” Other than that, you’ve got the popular ones – “O Brother, Where Art Thou?.” “Purple Rain.” “The Blues Brothers.”

I liked T. Bone Burnett’s work with Joaquin and Reese on “Walk the Line.” And I will readily admit: I dug “Braveheart” in its heyday.