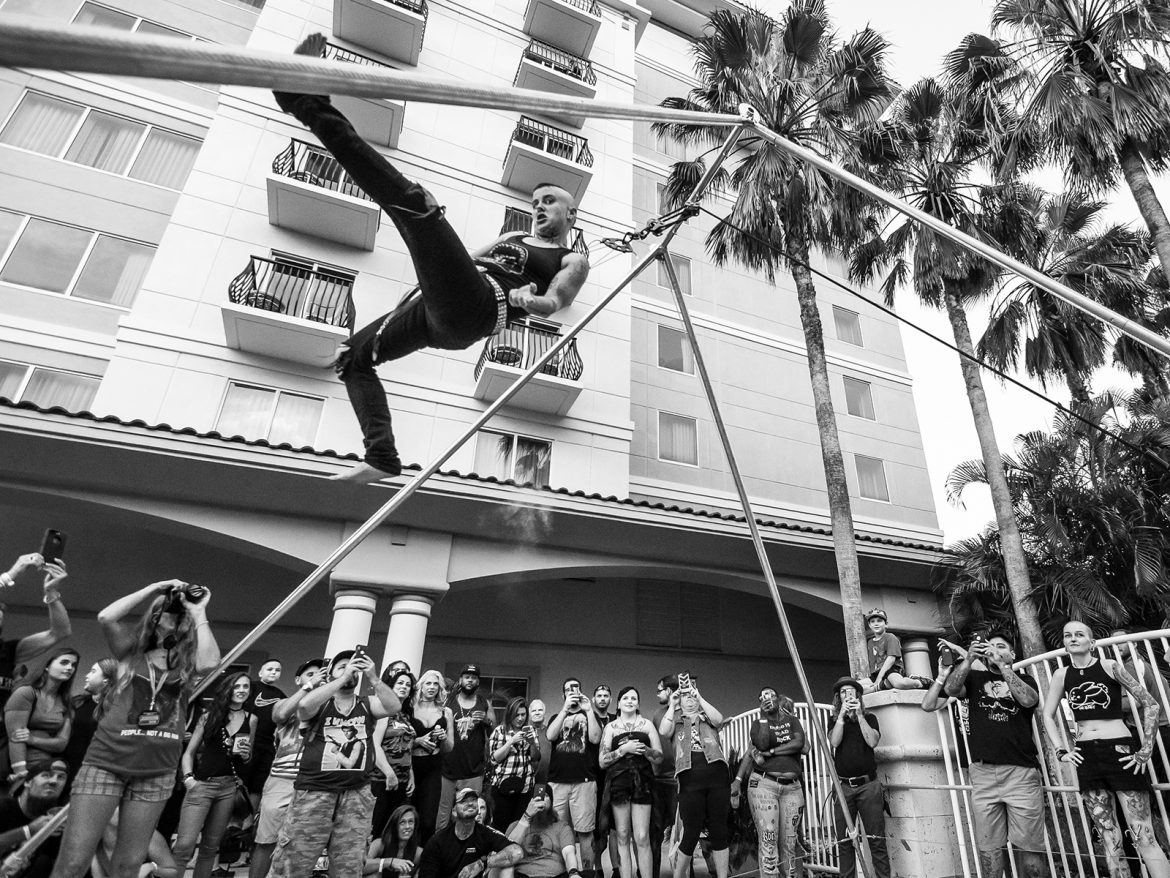 If you’ve been following my blog (and why wouldn’t you be?) you know I stopped by the 23rd Annual South Florida Tattoo Expo a few weeks ago and brought along my camera and a few good lenses with the intention of creating a promotional video (you can now watch the video HERE. My first post can be found HERE as well as images of the Expo’s entertainment (numerous live bands and a few hot bodies) but I saved the best for last. Well, at least it’s the most interesting – human suspension (and if you’re the squeamish type, you might want to move on to another post).

What is it exactly? It’s the act of suspending a human body from hooks that have been put through the skin. Sounds crazy, doesn’t it? I mean, what sort of person would pierce their skin with large-gauge hooks and hang in the air? Must be a new thing these kids are doing, right? Wrong.

The oldest recorded acts of human suspension date back approximately 5,000 years and originated among devout Hindus in India. It was deemed by practitioners to be an act of penance that would prove one’s ever-growing devotion to the Hindu gods if they engaged in progressively more intense suspension sessions. Human suspension has also been a tradition among certain North American Indian tribes going back centuries. Most notably, the Mandan Tribe who lived along the banks of the Missouri River. The ceremonies were first formally documented by George Catlin, a member of the Louis and Clark expeditions who described the ceremonies (called “Okipa”) as four-day-long events that required extensive preparation and self-sacrifice by all participants.

Modern suspension has been largely shaped by Fakir Musafar, a man who was born on an Indian reservation in South Dakota in 1930 with the name Roland Loomis, who is widely regarded as the “father of the Modern Primitives.” What he has pioneered since 1944 – tribal tattoos, nose rings, ear lobe enlargements, small-waist corsetry, human suspension and more – were once practices in an underground subculture. For Musafar, and many others after him, body modification is a form of self-expression and spiritual exploration, a way to move beyond the body into a higher spiritual plane. He died earlier this month at 87 years old. 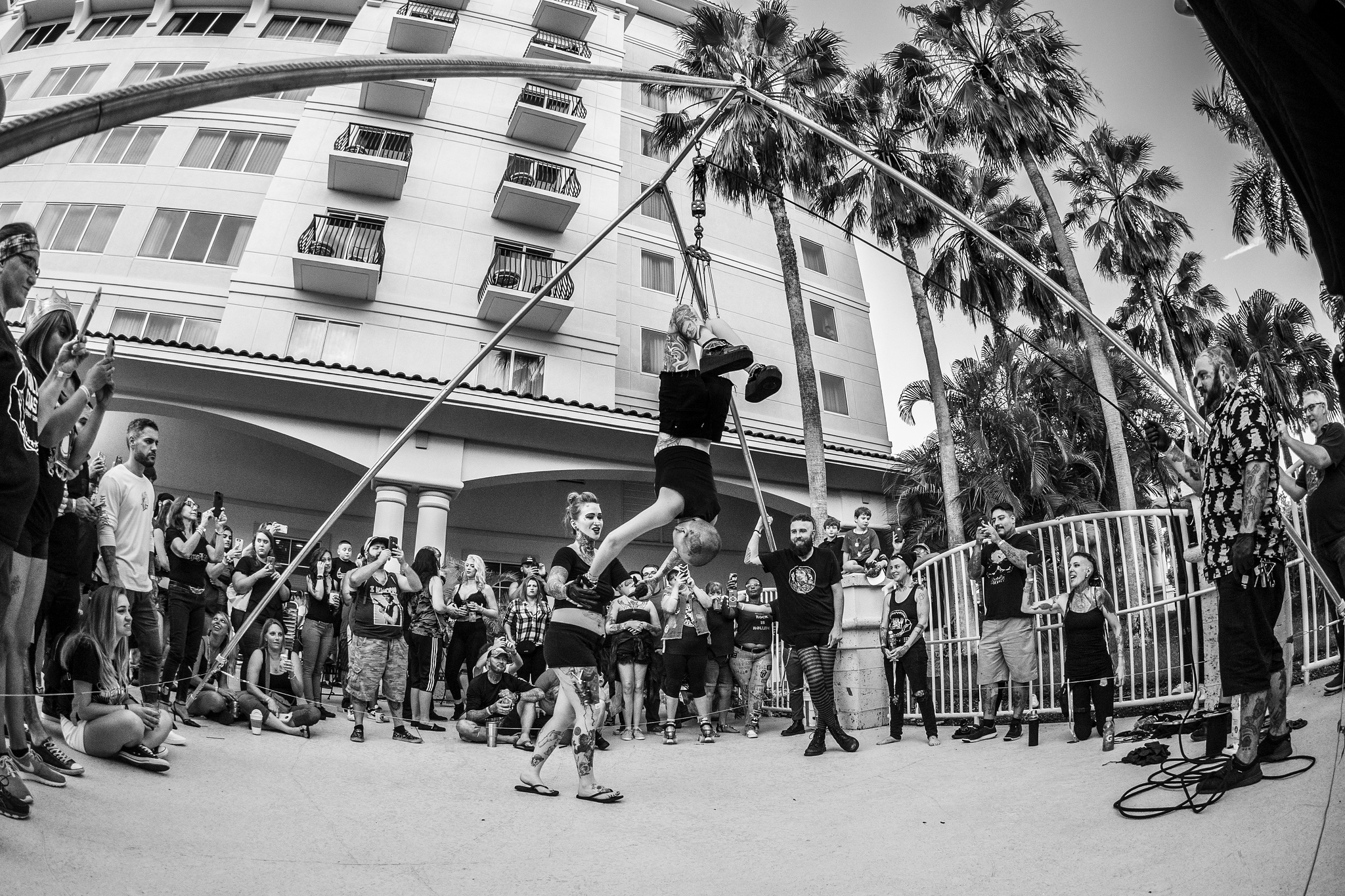 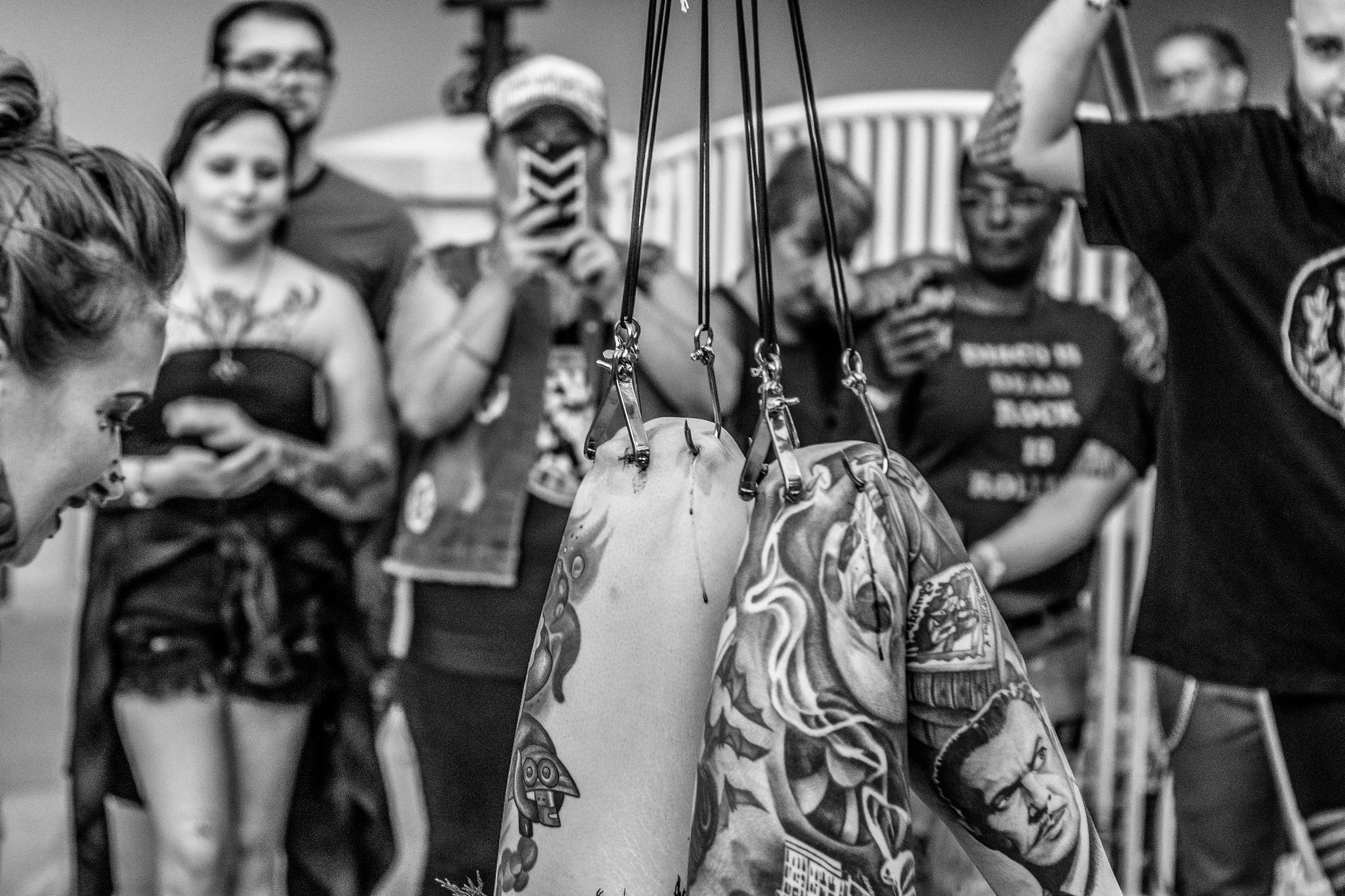 Many who practice human suspension describe it as cathartic. It’s rather shocking to the rest of us but that feeling of shock is what many who suspend are looking for – the rush of endorphins, serotonin, and other chemicals that results in a sort of high. Some see it as a spiritual experience. Others find it exhilarating. A subset of those who practice suspension do it as a type of performance art, choreographing lurid and shocking spectacles that are performed in front of audiences. 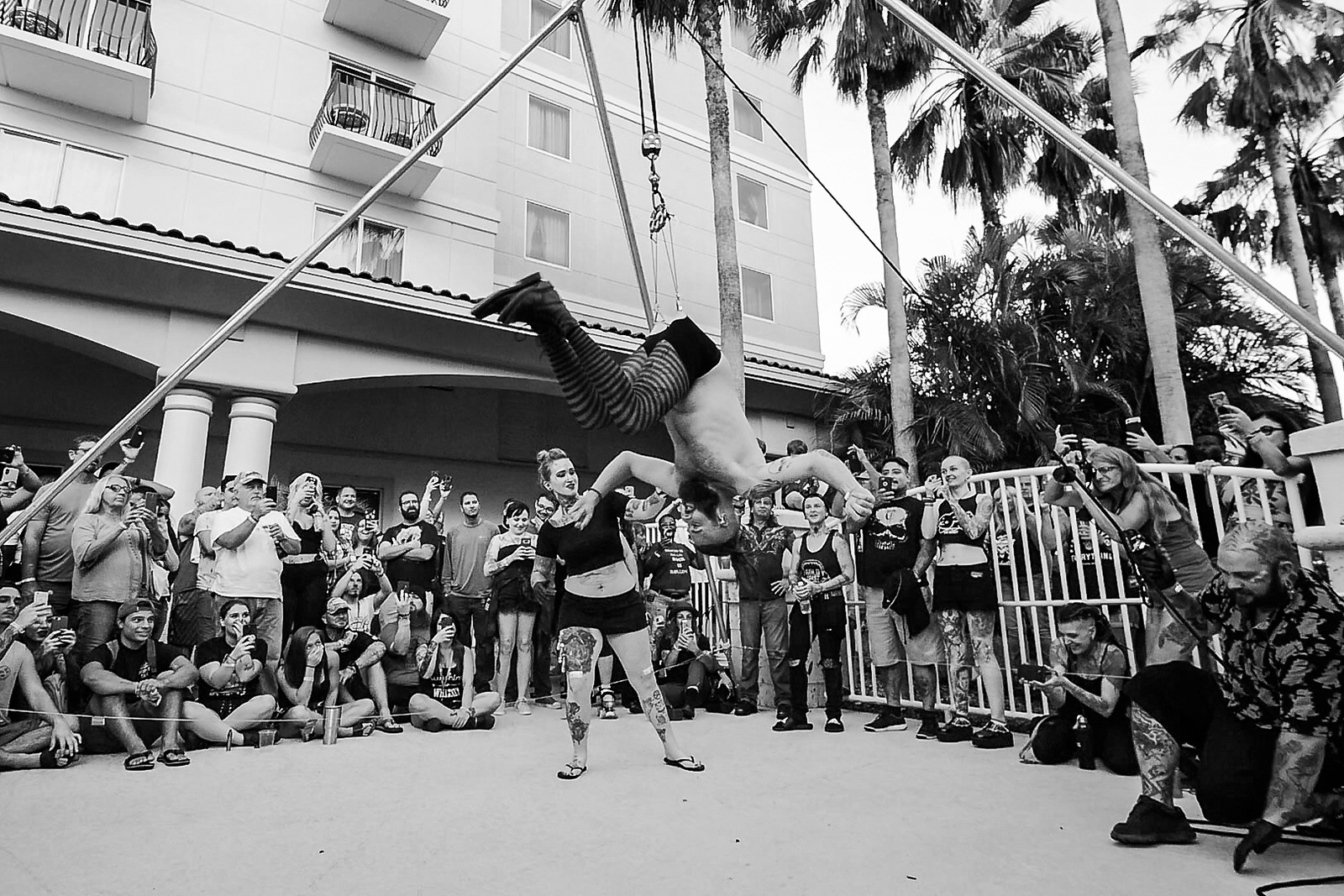 What I saw at the South Florida Tattoo Expo were a group of people really enjoying being suspended. It was quite the sight. The ringleaders of the group were Manda Rexx and Chadillac of Rexx Body Modification of Davenport, Iowa. And before you judge, remember: there are people out there who think that Van Halen made better records with Sammy Hagar than with David Lee Roth. If we can coexist with those people, who are we to judge a group of people who want to hang from hooks, right? Right. 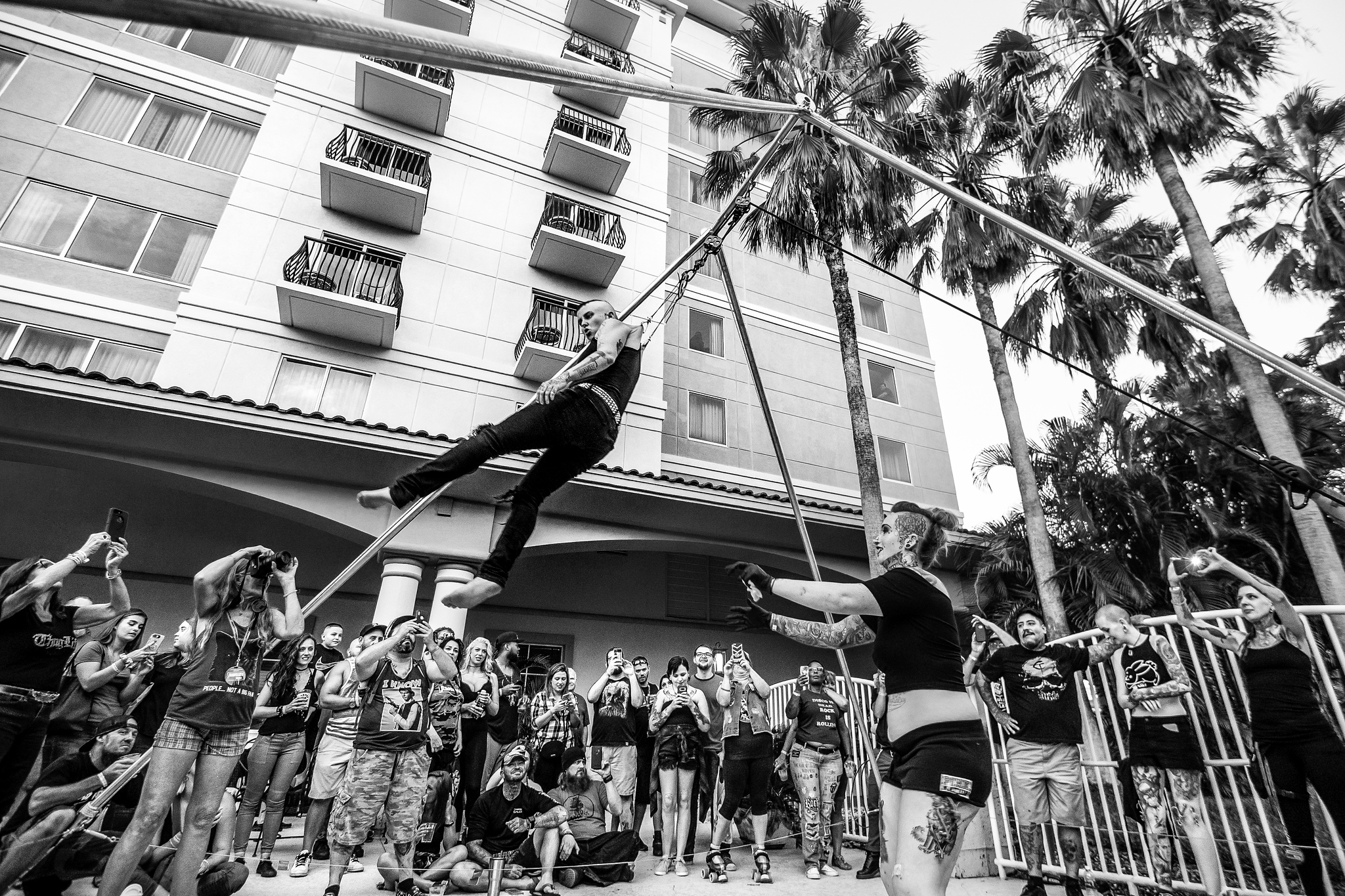 This post and the FULL IMAGE GALLERY can now be seen over at danperezphotography.com