Clint Eastwood’s “American Sniper” | For What it’s Worth

So I finally got around to seeing Clint Eastwood’s American Sniper yesterday with Mrs. Perez and I’ll admit right off the bat that I was somewhat disappointed. Not that it wasn’t a good movie – I mean if you were expecting a movie about a guy who really, really loved his country and was really, really good at killing people in Iraq with a high-powered rifle who were perceived to be the enemy of said country, then you got exactly that. Nothing more.

And therein lies the source of my disappointment. I was expecting a turkey leg and I got only a small chicken wing.

Let’s start with director Eastwood, shall we? In Chris Kyle, we have a man who specialized in a “profession” that I couldn’t even begin to understand – a sniper. Here is a man with a highly specialized skill who can kill people from great distances with a rifle. In the course of doing his “job”, he’s witness to bodies being ripped in two, brains and innards splattering against concrete and puddles of blood. So how does one sleep at night after a good day’s work much less four tours of duty in Iraq? 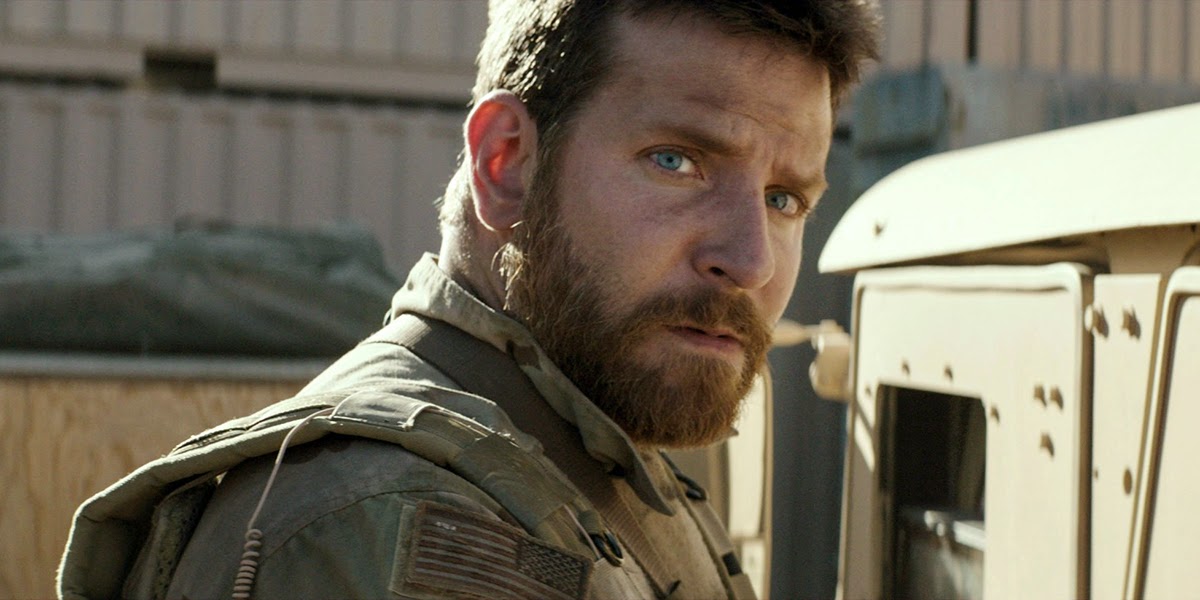 Eastwood never fully bothers to uncover the effects of such work on Kyle’s psyche; never takes us inside his head the way Coppola took us inside the tortured head of Capt. Willard in Apocalypse Now. As terrific as Bradley Cooper is in this film (and he does a lot with a little), he’s not much more than a one-dimensional character (“I just want to get the bad guys but if I can’t see them, I can’t shoot them”).

Eastwood also fumbles the ball on the effects Kyle’s service to his country has on his family. With the exception of a few clichéd examples (“You’re my husband, you’re the father of my children. Even when you’re here, you’re not here”), Eastwood and screenwriter Jason Hall seem unwilling to spend much time with Kyle at home, preferring to illustrate his badassery behind the scope of a rifle in the warm sunlight of Iraq. This leave Sienna Miller, who plays Kyle’s wife admirably, with a thankless and grossly underdeveloped role in the film.

Heck, I learned more about the effects of war on one of its most highly trained soldiers watching Stallone’s barely decipherable ramble at the end of First Blood (“There I flew helicopters, drove tanks, had equipment worth millions – Here I can’t even work parking cars!”) than I did from Eastwood’s kid gloves treatment of Kyle. 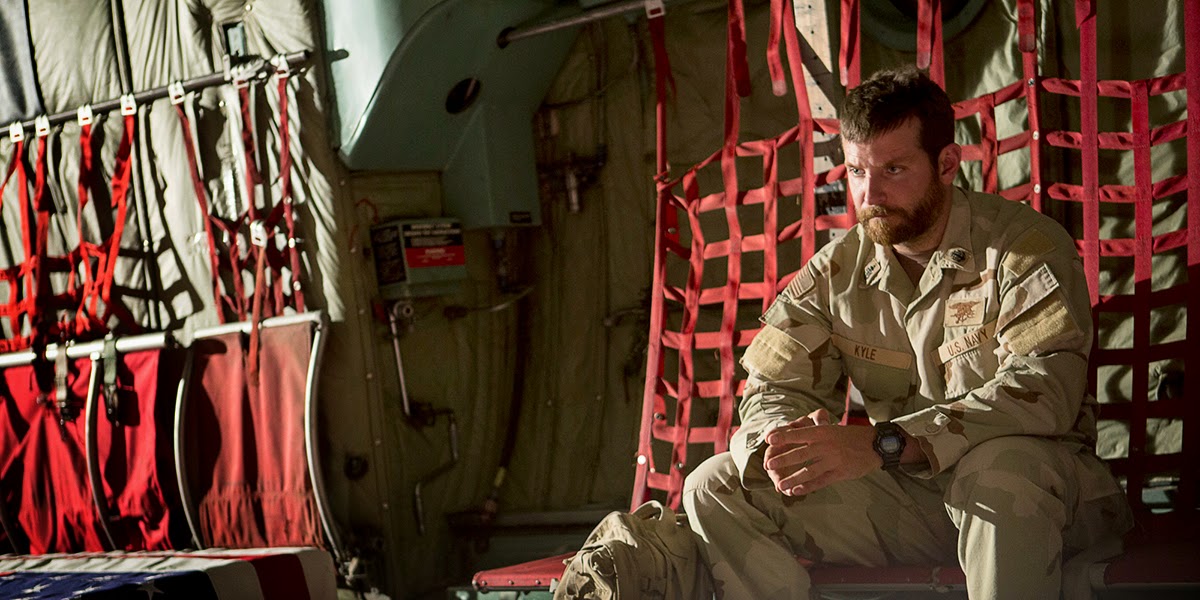 Then I started reading a bit about Kyle, something I hadn’t done before watching the film because I didn’t want to know too much about him – I wanted the film to surprise me. It didn’t. But what did surprise me was one notable scene in the film which did not occur in Kyle’s autobiography [SPOILER ALERT]. Let’s start with his first kill in the film, a young boy who is handed a Russian anti-tank hand grenade by his mother and sent off as a human sacrifice to toss it at an approaching Marine convoy in Fallujah. Kyle guns him down and does the same to the boy’s mother after she picks up the grenade lying beside her fallen son and also attempts to hurl it at US troops.

In Kyle’s book, this never happened. Kyle’s first confirmed kill in Fallujah was a woman who was attempting to toss a Chinese grenade (not a Russian RKG) at invading US forces. Why Eastwood felt compelled to alter the story to have the woman first pass on the grenade to a young child is a puzzling one. But then again, maybe not. Perhaps his intention was to dehumanize the Iraqi people in such a way that Kyle’s (and the US’s) subsequent actions in Iraq seem justified. I mean, when you invade another country, bomb their cities, kick in their doors in the middle of the night and deprive them of drinking water and electricity, you gotta expect you’re gonna piss off a few people, right?

Now as hard as it is for us to see ourselves as the bad guys, to many Iraqi civilians, the US was like the evil aliens taking over the world in Independence Day. So why the need to turn one of these “rebels” (and we all love rebels, right?) into a nefarious Iraqi bitch mother sending off her young son on a suicide mission to kill American soldiers just doing their job?

I guess it’s just better that way, yes? An easier pill for American film-goers to swallow especially with all we now know about the war in Iraq and its devastating effects on our soldiers as well as the Iraqi people. What it ultimately boils down to is chickenshit filmmaking. Period. 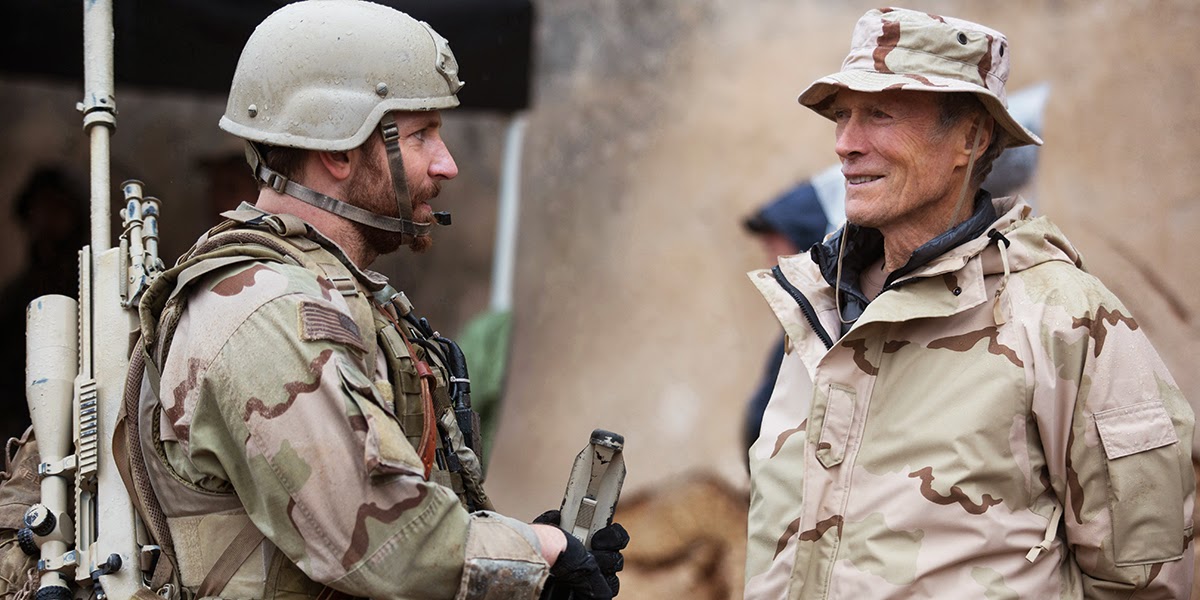 That said, Eastwood does make a few feeble attempts to illustrate the effects of the war in Iraq on our troops, on Kyle. But he seems far less willing to crack open that can of worms than he is to quickly relocate Kyle (and the audience) back to Iraq where things are far more black and white; an easier story to tell I suppose.

The Department of Veterans Affairs estimates that PTSD affects about 20 percent of veterans who served in Iraq. That Kyle found some solace in his life helping other veterans cope with PTSD and was ultimately gunned down by a soldier he befriended who was also suffering from PTSD made this a topic the film should have spent more time on (and less on a silly cat and mouse game between Kyle and an Iraqi sniper named Mustafa).

And, again, with all we now know about the war in Iraq; the intent, the casualties, the devastation, the aftermath – Eastwood fails to express where he stands on the issue. It’s as if Eastwood never really knows what he (the film) wants to say other than that Chris Kyle was a real badass soldier who loved his country. In that he succeeded.

The film, however, is never as tense as it should have been and unlike similar cinematic observations on the effects of war (The Hurt Locker, Born on the Fourth of July, Full Metal Jacket, The Deer Hunter), left me with little to chew on upon exiting the theater. With such a complex and controversial figure as Kyle (not to mention the war in Iraq), I expected more.

Luckily I have “First Blood” on bluray.

Here’s an interesting read on the film written by Ross Caputi, a former Marine who participated in the 2nd Siege of Fallujah > American Sniper?

Here’s a History vs Hollywood post about the film.

Here’s an interesting article I came across in The Guardian American Sniper: anti-Muslim threats skyrocket in wake of film’s release

A Winter Stroll in the Park | Bronx, NYC (In Pictures)

Personally I have no interest in seeing this film. (Does that make me “Un-American”?) I had seen interviews Kyle had given prior to his awful murder at the hands of a fellow soldier. I have seen countless news stories about him after his death. He is a tragic figure who loved his country and saw some awful things in his tours of duty. His poor wife and family have paid a terrible price in this war.

My issue with the movie (and the people in the media who glorify Kyle’s story in general) is they want to put the man on a pedestal. The same thing was done after the death of Pat Tilman. Both are tragic stories, but only 2 of thousands of similar stories that are out there from the men and women who spent the past decade and a half fighting wars in the middle east.

We want to feel good about guys like Kyle and Tilman but as a nation we turn our back on the thousands of other soldiers who have come home only to struggle with everything from PTSD to unemployment. The VA system is a cruel maze of buracacry which makes veterans wait months before they can get the help they so desperately need.

6,500 former military personnel killed themselves in 2012. Where is all the outrage? Why are Chuck Schumer or Marco Rudio not demanding Congressional investigations into this epidemic?

So yes, Kyle is a tragic figure. Instead of handing Eastwood and Cooper an Oscar, perhaps we as a nation can actually do something to help all these folks who volunteered to go fight on behalf of our country only to come home and be largely ignored by our society in general.

*steps off his soap box*

Elvin, I tried to keep away from political speak in my review of the film but I found it a rather glaring omission by Eastwood to not touch upon the issues you describe in your comment (which is dead on).
Apparently, his only goal in making the film was to glorify the career of Kyle and not the issues associated with a highly controversial war (and figure in Kyle).
In that, he succeeded. Alas, I thought Mr. Tough Guy wouldn’t be afraid to explore the darker side of the war and its effects on our soldiers (not to mention the countless Iraqis affected by our actions).
Nice to see you here, bud.