“Math Test”: A Poem by my Teenage Daughter 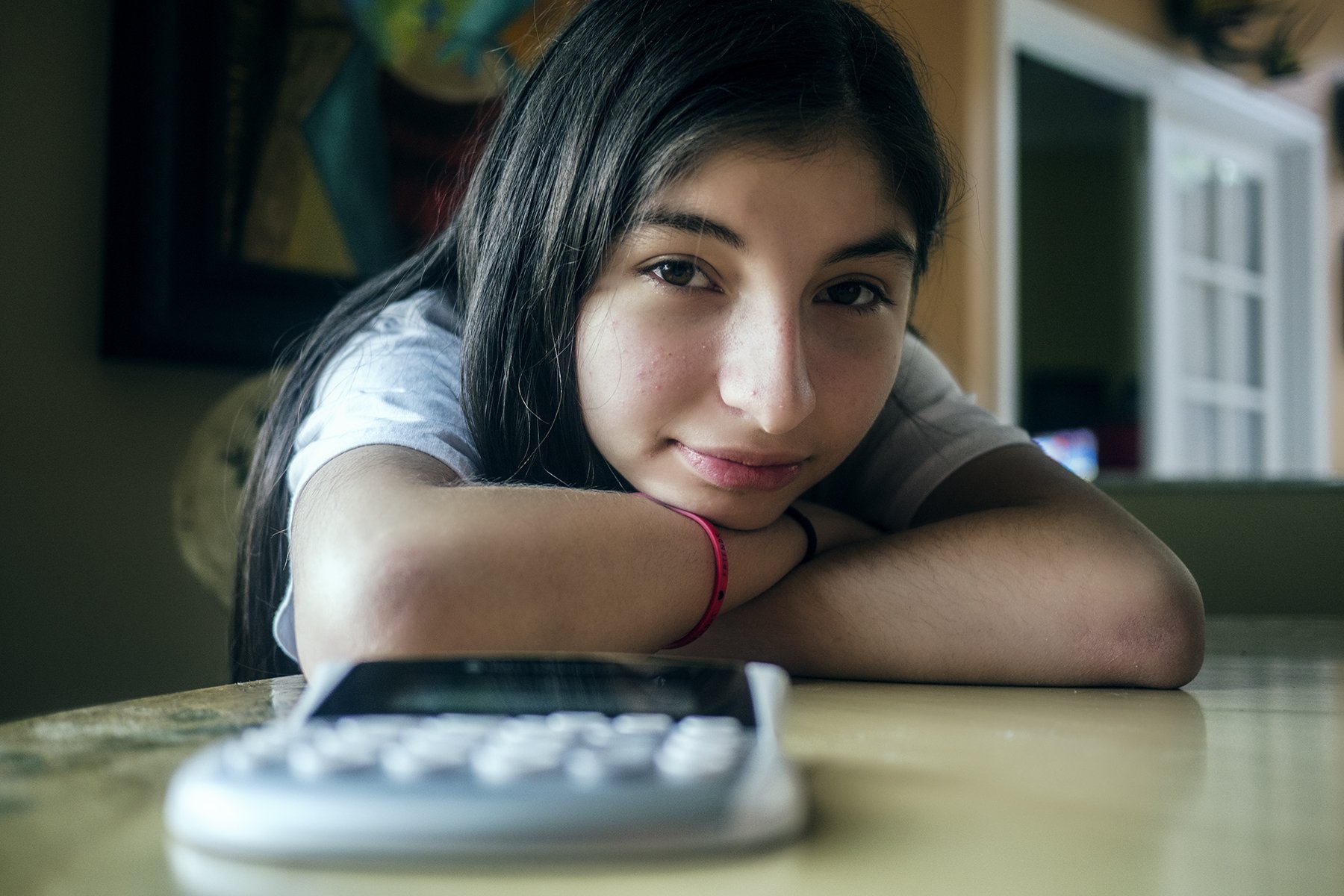 I’m not the only one who sucked at math, right? Hated math? Thought that other than being able to ascertain how much change you were due after you handed over a twenty dollar bill to the supermarket cashier, all other forms of math were mere folly? Can I get an “Amen”?

Yeah, I sucked at math; hated it. Why? Because I knew my brain was gonna execute a crash dump of all things geometry, algebra and calculus the minute I passed (survived) the class. Alas, you still had to pass the class or suffer the torment of repeating it the following semester. I wasn’t down with that. I went to one of the worst high schools in the Bronx (Evander Childs) and I sure as shooting wasn’t about to spend another minute in there I didn’t have to – especially repeating math. So as much as I hated math, I found some “creative” ways to get by and as Vito Corleone said in “The Godfather”, “That’s my life, I don’t apologize for that.” But enough about me.

Now, it appears that my “math sucks monkey balls” gene has passed on to my daughter. She’s struggled with it all through high school, failing it a few times already, becoming disinterested with it. Her mother and I know she can pass it if she puts her mind to it but it’s a hard sell when we all know how useless geometry and algebra is unless you plan on being an engineer or scientist.

My daughter has neither of those aspirations.

Her only hope is that math becomes as demonized in the US as Salman Rushdie’s “The Satanic Verses” was in Iran and that a fatwā be ordered against anyone teaching math. But that’s merely wishful thinking.

So I get a call last semester from her math teacher telling me my daughter failed her latest math test. Yeah, I was upset but I’m thinking, “She’s failed just about every math test so far – why is her teacher calling me on this one?” Apparently, my daughter didn’t just fail the test, she handed it in without offering up a single answer. OK, still not happy about it but if you know you’re gonna fail – why bother, right? Then her teacher explained to me what my daughter actually handed in – a poem written on her scrap paper.

My daughter’s math teacher begins to read me the poem. When she finished, my first thought was, “Dang, that was pretty good.” Getting back to her teacher, I managed to offer up a, “Well, that’s just unacceptable – I’m gonna have a talk with her about that” before thanking her for calling and hanging up.

True to my word, my wife and I did have a chat with our daughter about the whole incident but it ended up with a few words of praise for her well written albeit poorly timed prose.

Now I know some of you out there are gonna think Mrs. Perez and I are bad parents for letting this sort of behavior go by without a serious grounding or any other form of punishment but in times like these, we try to consider our daughter as a whole person and not base our judgement of her solely on her school grades. She might suck at math but there’s a helluva lot of good in her – and when she finally finds that “thing” she wants to excel in, she’s gonna leave this world a whole lot better than how she came into it. We believe that unreservedly.

So without further ado, I present you with my daughter’s poem, “Math Test”. Oh, and it was accepted to be published in the book ‘A Celebration of Poets’ by the good folks over at Creative Communications after she submitted it to one of their poetry contests.

Sitting in my math class staring at this blank test,

I have no idea what I’m doing but they tell me “Do your best.”

I’m playing with my fingers, I’m looking around,

I just see people working, and no one makes a sound.

I wish I knew what I was doing.

I wish I understood.

I can’t do this test,

I would if I could.

My calculator is untouched.

My pencil is useless.

I don’t know why I can’t get math,

Everything about who I am changes in this room.

I just keep my head down and hope the bell will ring soon.

I wish I knew what I was doing.

I wish I understood.

But I’m sorry to say that I can’t take this test,

I would if I could.

This is the second published poem by my daughter – you can read the first one HERE.

Love you and your daughter. She has a creative mind. Math wasn’t my best subject either, but now I love social media measurement. I was over 30 before I found that passion. Go figure. Guess I was a late bloomer. MIranda will find her thing, and she may even grow up to like math a little.

Kami,
Who knows, maybe social media measurement and analytics is in her future. As a betting man, however, I’m gonna put my money on “it ain’t”. That said, one never knows when their “thing” comes along that fires up the passions. Hope she finds it 🙂
Nice to see you here…

Brilliant. You have no idea how much I can relate to Miranda, as a child growing up and now as an adult. Her poem was me a few weeks ago when I had to take the math portion of my entrance exam for school. I did a boatload of studying and had help from a wonderful friend, but I was still freaked out. I passed (barely, I’m sure). Does that make me like math? Oh heck no, I still have an algebra class to take in my first term. But, I do know that I’m not as bad at some of it as I thought, I just learn it differently than other people. Perhaps that’s the way it is with Miranda. Oh, one more thing. You’re correct, we don’t use “Algebra” in our daily lives, we use the critical thinking that it teaches us. I recently found that out.

Miranda, thank you for putting into words what I wish I could’ve all those years ago. Not all of us will be wonderful in or even like math, and that’s ok. You’ll find your thing and will be brilliant in it! Of that, I have absolutely no doubt.

Sherree,
I know that math is good and being good at math is good. It just ain’t for everyone. The more I study “left-brain” and “right-brain” people, the more I understand why some people struggle with it.
Thanks for the kind words (Miranda says “thanks” as well) and good luck with the whole algebra thing 🙂