Bloodshed and Beauty: Sarajevo (In Pictures) PART I 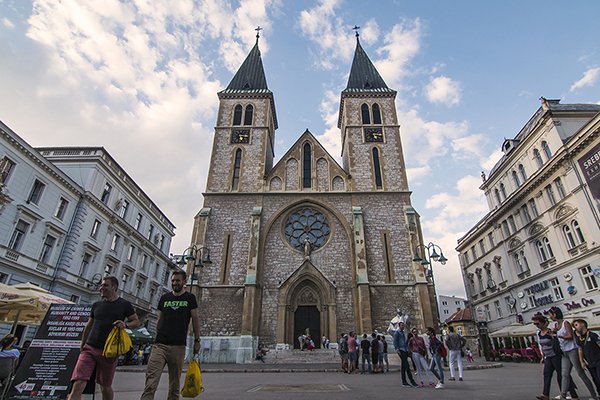 My wife and I recently traveled to Bosnia and Sarajevo to attend a screening of one of my films at the Jahorina Film Festival. During my week stay in this beautiful country, we stayed in the heart of Sarajevo at Hotel Old Town and spent the better parts of two afternoons walking the streets of Sarajevo, the country’s capital city as well as its largest.

Due to its long and rich history of religious and cultural variety, Sarajevo is sometimes called the “Jerusalem of Europe”. It was, until late in the 20th century, the only major European city to have a mosque, Catholic church, Orthodox church and synagogue within the same neighborhood. The city, which dates back to the 15th century, has also attracted international (and infamous) attention.

It was in Sarajevo where the assassination of Archduke Franz Ferdinand of Austria, heir presumptive to the Austro-Hungarian throne, and his wife Sophie, occurred on 28 June 1914; setting off World War I. Sarajevo was the site of the 1984 Winter Olympics, the first Winter Olympics to be held in a Communist state (remember Torvill and Dean?). And it was in Sarajevo where the longest siege of a capital city in the history of modern warfare took place.

In April of 1992, after the Muslims and Croats of Bosnia and Herzegovina had declared independence from Yugoslavia, the city of Sarajevo fell under attack from Bosnian Serb military groups with the backing of the Serb-dominated Yugoslav army, who were against Bosnian independence. The Bosnian Serbs encircled the city and placed Sarajevo’s 500,000 citizens under siege. Sarajevo was bombarded by artillery and snipers picked off residents as they walked in the streets. The Siege of Sarajevo lasted from 5 April 1992 to 29 February 1996 (1,425 days) during the Bosnian War and claimed the lives of almost 14,000 people, including over 5,000 civilians.

Today, Sarajevo is a city on the rebound and on the rise. The travel guide series, Lonely Planet, has named Sarajevo as the 43rd best city in the world, and listed Sarajevo as one of the top ten cities to visit in 2010. In 2015 the Huffington Post named Sarajevo in its list of “10 of the World’s Most Beautiful Cities“. Moreover, in 2015 Bosnia and Herzegovina surpassed 1 million tourist arrivals, an increase of 21.5%.

Sarajevo was indeed a beautiful city to visit. The history, the culture, the great food (get ready for plenty of beef, veal and steak!) and even greater coffee, all without the high costs of those other major European cities. Walking the streets of Old Town with my wife into the evening is something I’ll never forget. The city has come a long way – but you don’t need to look too hard to see its many scars still healing.

As I am wont to do, I brought along my Lumix GH4 and snapped several photographs as we walked around Sarajevo. Special thanks to our tour guide Ahmed Lavić of ToursbyLocals.com for helping us get around to all the interesting sites around town (and serving as my unwitting production assistant).

Here’s Part I of a two-part set of photographs from my time in Sarajevo. Check out Part II of this series HERE. Enjoy…

Walking down Ferhadija, we came across the Eternal flame (Vječna vatra), a memorial to the military and civilian victims of the Second World War in Sarajevo, Bosnia and Herzegovina. The memorial was dedicated on 6 April 1946, the first anniversary of the liberation of Sarajevo from the four-year-long occupation by Nazi Germany and the fascist Independent State of Croatia.

The Cathedral of Jesus’ Sacred Heart was built in 1889 in the Neo-Gothic style by Josip Vancaš, a Hungarian architect. There is also a statue in front in honor of Pope John Paul II, who visited Sarajevo in 1997, soon after the war had ended.

The Latin Bridge (Latinska ćuprija) is an Ottoman bridge that dates back to 1541 and spans over the Miljacka river.

Across the street from the Latin Bridge, a man stands on the corner where 18 year old school boy Gavrilo Princip shot and assassinated Archduke Franz Ferdinand and his wife Sophie as they drove by in their motorcade. They both died seated upright in the car before they could receive medical attention. The assassination of Ferdinand by a Serbian Bosnian underground organization that went by the name “Black Hand”, was supposed to help break Bosnia away from Austria-Hungary and ultimately facilitate a Serbian takeover of the province. Ferdinand was the heir apparent to the Austro-Hungarian Empire. A month later, World War I began. Today, on that very corner stands the Museum of the Assassination of Franz Ferdinand.

“Multicultural Man Builds the World”, a sculpture by Italian artist Francesco Perilli, was unveiled in 1997 and sits in Trg Oslobođenje, or Liberation Square, in the center of Sarajevo. To the right of the sculpture is the Cathedral Church of the Nativity of the Theotokos or the Serbian Orthodox Cathedral, which was erected at the request of the Orthodox parish of Sarajevo between 1863 and 1868.

The scars of the city, in the form of facades riddled by artillery fire, are still visible as you walk the streets of Sarajevo…

Sarajevo’s City Hall (also known as Vijecnica), a stately neo-Moorish edifice which opened in 1896 and was converted to the National Library in 1949, has been restored to its old glory after being destroyed by Serb shelling during the siege of the city in 1992.

Across from City Hall and on the other side of the Miljacka river, the urban landscape is breathtaking…

At first glance, Sarajevo’s bustling Markale market might appear like any other farmer’s market. However, on February 5, 1994, during the siege of Sarajevo, 68 people were killed and another 144 wounded when a shell hit the crowded market. In a 2016 article on balkaninsight.com, one survivor, Esad Pozderac, whose sister was killed in the blast, recalls, “When I looked around, everyone else was dead. Blood was pouring from above, there were people without arms and legs.” A memorial at the back of the market (photo above) lists the names of those whose lives were lost in the attack on an encased red wall.

I came across a video on youtube that was filmed right after the blast; it’s graphic and heartbreaking but it’s a look at what must have been everyday life in Sarajevo during the siege. You can watch it HERE but it isn’t for the squeamish. Stanislav Galic, the commander of the Bosnian Serb Army’s Sarajevsko-Romanijski Corps, was sentenced to life imprisonment in November 2006 for wartime crimes in Sarajevo, including the shelling of the Markale market.

On August 28, 1995, another attack on the market killed 43 and wounded 75 – the names of those killed in the attack are listed in a memorial plaque across the street from the market.

Over 470,000 grenades fell on Sarajevo during the siege, or 330 per day. A Sarajevo Rose is a concrete scar caused by a mortar shell’s explosion that was later filled with red resin.

Hope you enjoyed Part I of the set, watch for Part II later this week…