Having moved down to South Florida from New York over 10 years ago (has it really been that long?), I’ve come to realize a few things: Hot, humid with a chance of thunderstorms is pretty much the daily forecast for about 8 months of the year, wearing shorts in the winter is pretty cool, and the service industry down here is deplorable. You think New York is bad? It’s even worse down here. We might call ourselves the “Sunshine State” but there ain’t no sunshine to be had if you go to just about any supermarket, retail store, diner, hotel, or restaurant down here. Chances are good you’ll be treated with indifference or worse. I’ve given up on expecting anything less and have become comfortably numb – that’s how I deal with it.

Now, when I go to a local McDonalds, Burger King, Taco Bell, etc, my only expectation is to receive my food. The cheaper the food down here, the cheaper the service. I’m not expecting a warm greeting or a “Have a nice day!” – just my food, please. But my wife and I really like going to Panera Bread for a couple of reasons. For starters, their nationally recognized community involvement (check out their revolutionary Panera Cares initiative). They also have a fancier sandwich menu, it’s a comfier environment, and they sell a wide array of fresh bread (it smells good in there). Now, the food costs a bit more than at your average fast food place so I expect just a little better service when I eat there.

Usually, the service there is quite good which makes me (and Mrs. Perez) feel quite good (they have a few cashiers there who are as friendly as any I’ve encountered down here). But during our last few visits, we’ve noticed somewhat of a decline in the above average service we’ve come to expect; most notably in the cleanliness of the place and the accuracy of our order. During our last visit there, however, things got real.

When we arrived (around 2:30pm, well after the lunch rush), there was an unusually long line of people and only one register working. There was a young lady who appeared to be a manager working the register (while two other employees appeared to be trying to figure out what was wrong with the other register) and she wasn’t in the best mood. We didn’t get much of a greeting when we got to the register (I was cool with that – this is South Florida) but in her hurry to move the line, she failed to listen to my wife’s order (we order the same dang thing every time) then snapped at my wife for having rung in the order incorrectly (“You didn’t tell me that!”). Not cool with that.

At Panera Bread, after placing your order, they give you this small buzzer that will light up and vibrate when your food is ready. So we place our order and go and look for a place to sit. We like sitting in the booths and there are four available. However, two of them still have dirty trays of food on them and the other two are just plain dirty. Not cool with that.

I get a few napkins, wet them with water and wipe down a table. After a few minutes, my “thingy” starts buzzing so I head to the pick up area to get our sandwiches. More issues…

Me: “My sandwich isn’t toasted.”

Him: “It didn’t say it was supposed to be toasted.”

Me: “Check the ticket.” (Did I mention we order the same dang thing every time?)

Him (after looking at the ticket): “Oh, OK. Let me toast that for you and I’ll call you when it’s ready.”

So I take Mrs. Perez’s sandwich over to her while I wait for mine to be toasted. After a few minutes, I peek my head up over the booth and see my sandwich (now toasted) sitting on the pick up station counter. I go over to the counter: “Is this me?” Him: “Oh yeah, that’s yours.” Not cool with that.

Mrs. Perez and I are now sitting at our booth eating our sandwiches (she got a head start but I quickly catch up with her). I’m a little more displeased than I should be at Panera Bread – like I said, I expect a little more here and lately things ain’t been up to snuff. Then I hear the folks at the pick up station getting into a somewhat heated argument with the folks at the register. You know I’m not cool with that. I’ve just about had enough.

I’m not happy. So after eating, I reach for my phone and do the only thing a rational man of sound mind should do at that point – I tweet about it…

Done. Catharsis. Maybe someone over at Panera Bread will see the tweet, maybe not. I don’t care. I’m moving on. To my surprise, I get a tweet about 10 minutes later from Panera Bread…

I DM them my info. Then I get this…

Somebody from Panera Bread actually heard my cry from the wilderness AND they said they’re gonna follow up with me? Yeah, I’m feeling important. I mean, isn’t that what social media is all about? Being followed, being liked, being friended, being listened to? Sigmund Freud said, “The desire for a feeling of importance is one of the chief distinguishing differences between mankind and the animals.” He was right.

The following morning, I see two voice messages on my cell phone (I’m not an early riser). One is from Shannon from the Panera Bread location Mrs. Perez
and I frequent and the other is from Tricia Penn, Director of Operations for Panera Bread South Florida. They received my information and wanted to discuss my experience. Wasn’t expecting this at all. Things just got serious.

I start at the top with Tricia Penn. I get right through to her and tell her exactly what went down. She apologizes for my less than acceptable experience, promises to look into the matter and offers to send me some coupons for free sandwiches. I like when my “customer voice” is heard and I like coupons for free sandwiches. Hopefully, the management at Panera Bread will take the steps to improve the customer experience at that location. My job here was done.

I’ve been back to Panera Bread twice since my conversation with Ms. Penn (I’m also two coupons down). Have I noticed a whole new environment since my tweet? Not particularly. I mean, the service has been good, our orders have come out right, there’s been no bickering behind the counters – we’ve had a pleasant experience. An exceptional experience would be ideal but for now, I’ll take pleasant. This is, after all, South Florida.

Now, If you listen to the “experts”, they’ll tell you that social media gives us, the people of the free world, a voice. Most of the time, that voice gets lost in the raging torrent of white noise that is our twitter and facebook streams. I’ve expressed my displeasure with a company’s product/service several other times without an answer; companies who have a presence on social media. In the case of Panera Bread, my voice was heard and action was taken. Oh, and did I mention the coupons?

Yeah, I’m real cool with that. 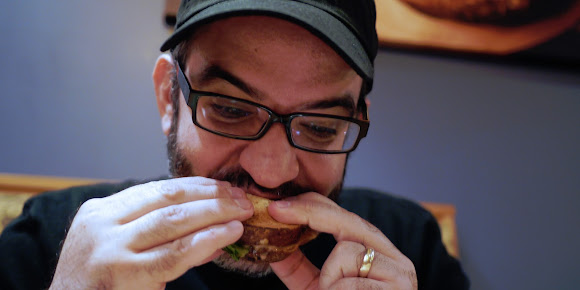 NOTE:
Mrs. Perez is a 1/2 Frontega Chicken sandwich and cup of New England Clam Chowder kind of gal while I’m a Bacon Turkey Bravo (smoked Gouda cheese!) kind of guy. Just in case you were curious…

Great post Dan! Panera originated as St. Louis Bread Co. in my hometown. It still goes by that name here. I get great service every time I go – bacon turkey bravo – and not surprised they were responsive. Social media allows us to be an active participant in service businesses. And, if they are as smart as Panera) they should be listening. Hope our paths cross over coffee sometime Dan!

It was a nice move on their part – shows their not just tweeting out lunch specials all day. Coffee at Panera sounds like a plan 🙂

Great article. Glad that Panera is stepping up as a social media customer service role model. Others should take notes on how this was handled. By the way, Lois Creamer sent this article over to me. Thank you Lois and Dan!

Lois is OK in my book – thanks for the comment 🙂

I agree… excellent article and great story. Something I will be sharing with my clients and potential new clients. And who said you were always negative.. 🙂

I say nice things every once in a blue moon 😉

I recently had a very similar experience at Panera. The line was long, the manager was rude, my food was messed up and I was looking at health code violations all over the place. I also tweeted to Panera and they directed me to their customer service form online. I then took all of my comments there and received an email asking for my address to send me a gift card. Not quite the treatment that you received, but certainly nice to be noticed after having a bad experience.

Apparently they didn’t really want to roll out the red carpet for me. I received a ten dollar gift card in the mail just now. Of course it is better than nothing, but is 10 dollars the price of a forty minute wait and two hairs in your soup?

I only eat out when I have to travel for work, but I’ve done the same thing in a way. If I have less than stellar service, I make my voice known (although not tweeting from my phone, as I’m not that fancy.) However, I’ve also called the manager over to compliment the service if I found it to be above average. I’m a vegan, so sometimes “special orders” are a pain in the butt for restaurants. When they do a good job, I like it to be known.

There’s nothing more frustrating than dealing with employees who clearly don’t care though, and it’s impressive you were taken care of so well. Plus…coupons!

I’ve gotten used to poor service down here so when I get good service, I usually like to point it out as well.
Always nice to see you here…
PS – I didn’t know that tweeting from my phone was “fancy” 😉

1) Love Panera in general, for the reasons you laid out and more (mainly to do with abundant coffee and cookies).

2) “The experts”… yes, this is where the rubber meets the road, dear boy. Now that we all have this voice, the lag is with the organizations not yet willing to follow customers where they’re attempting to be heard. Panera is there, listened, made a difference, and kept you on board. This could have been a step on the path to leaving them, but they’ve turned you around to an extent. Those not listening just lost a customer. I’m not saying that social is an entirely new game, but it is changing the existing game.

3) Don’t forget us little people now that you’re the boss of the Internet, cheers.

Good point – and I’m usually critical of customer service via social media. It only works if companies listen AND act.
As for being the boss of the internet, my rugged good looks play a big part in that 😉
Cheers!

Well, one doesn’t become Time’s Person of the Year solely by making films, does one? It’s like I tell everyone: Yep, that Dan Perez is a legend of his mind.